Since leaving the UAE, I have been staying in Manchester with my friend Dalip. We met at university, where he was studying for two semesters abroad, so I was very excited to see him again! He and his family are Sikh, so I have been learning a lot about Sikhism while here.

I’ve also been thoroughly rained on, and have almost gotten over the cold I immediately caught. The change from Dubai sun to Manchester rain was too much!

Upon arriving in the UK, it quickly became apparent how different it is here compared to Canada. Besides driving on the other side, (which I’m still getting used to), the look of everything is different. Most buildings are made of brick, and anywhere you drive you’re bound to find beautiful stone churches like this one. 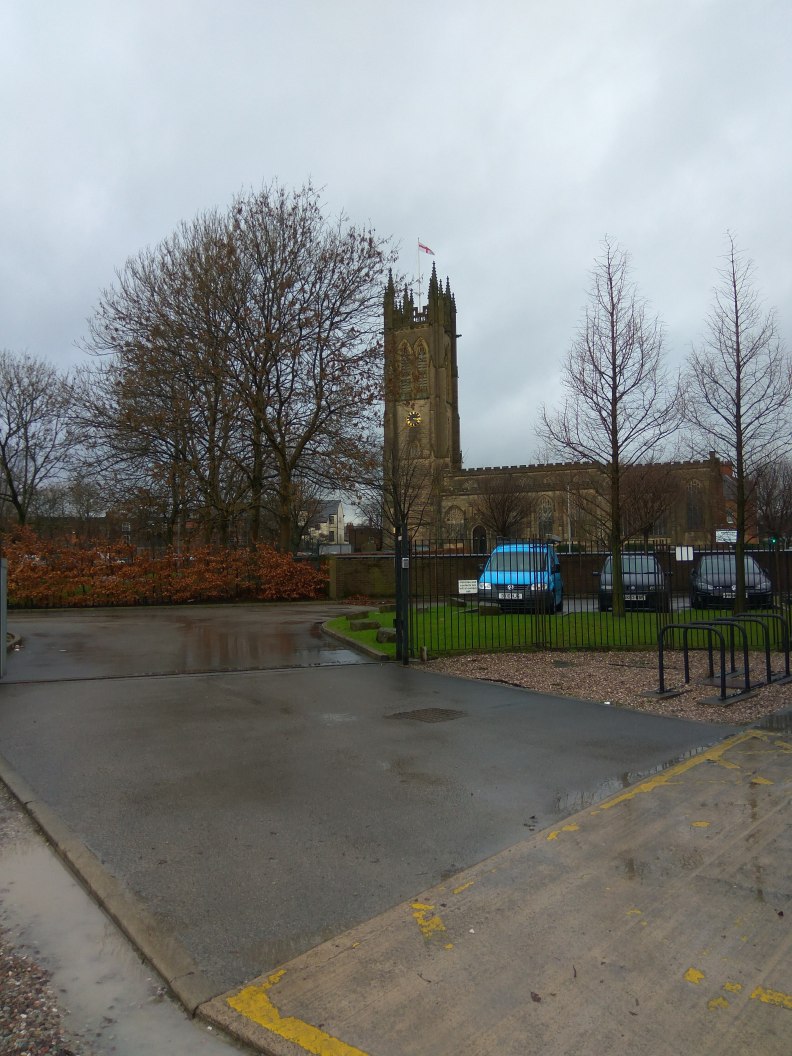 On the first day, Dalip took me to the local museum in town. It was interesting seeing old wartime posters, and models of old English homes and stores. 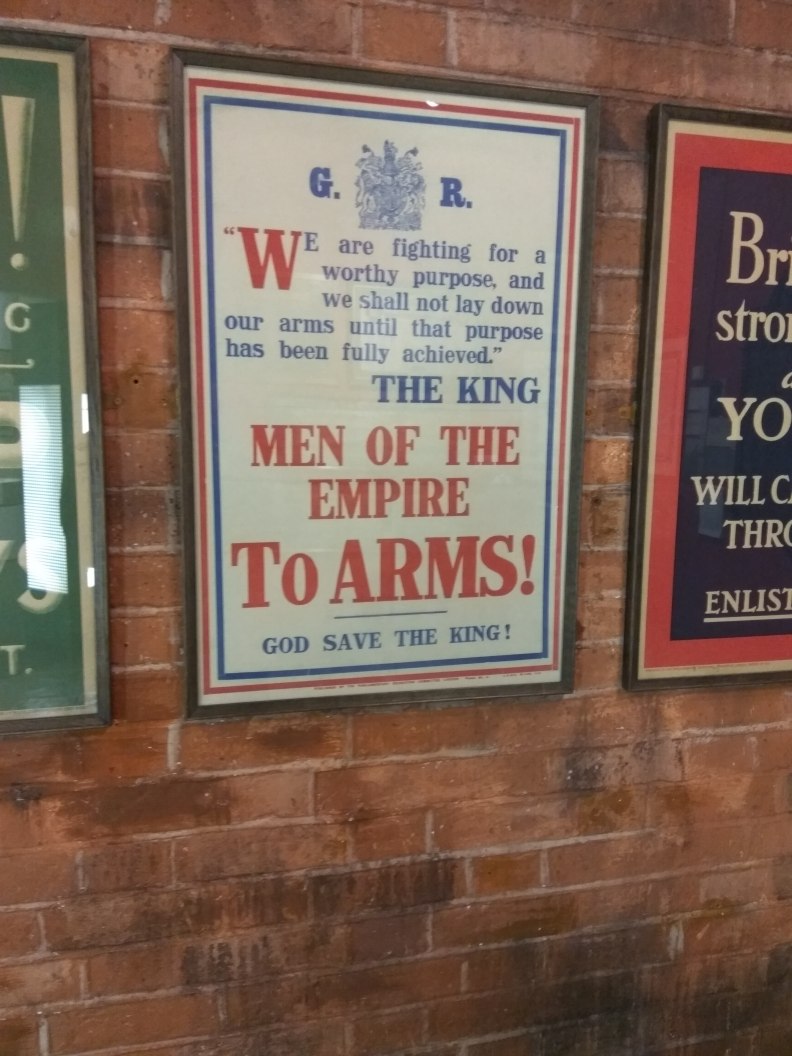 We then went to the Trafford Centre Mall, and I’m starting to wonder where all the chandeliers went in our malls at home. 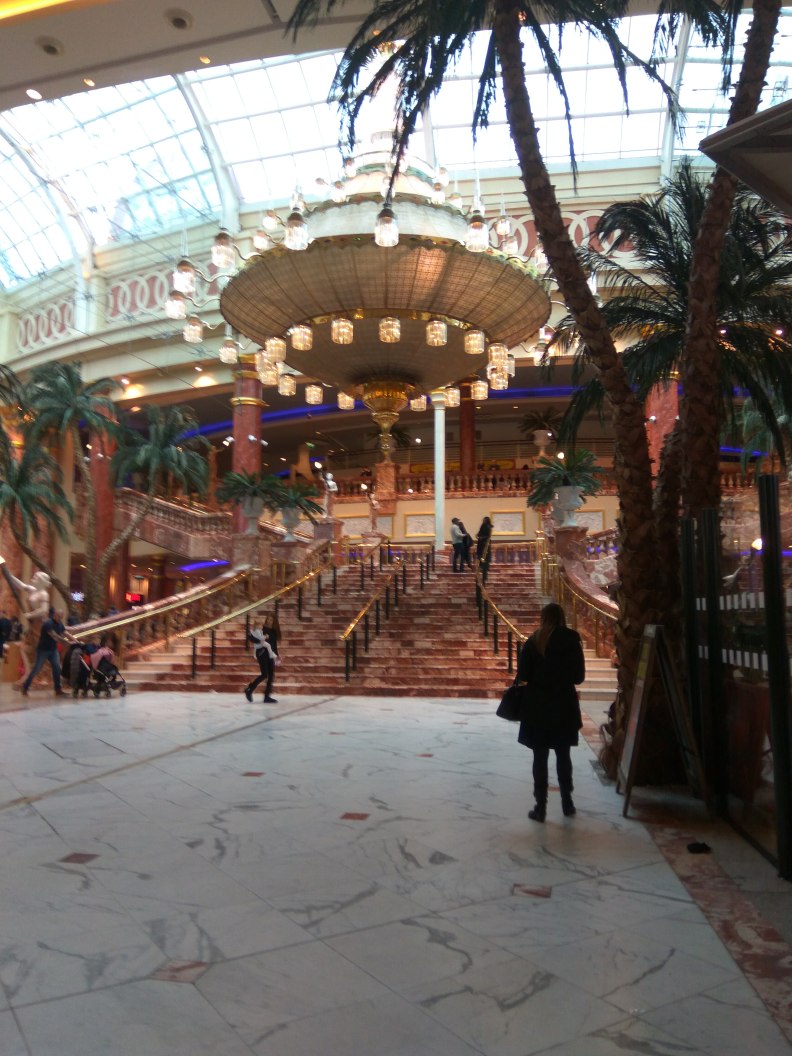 Anyways, since Dalip and his family all work during the week I have been exploring downtown on my own. The city square is beautiful: 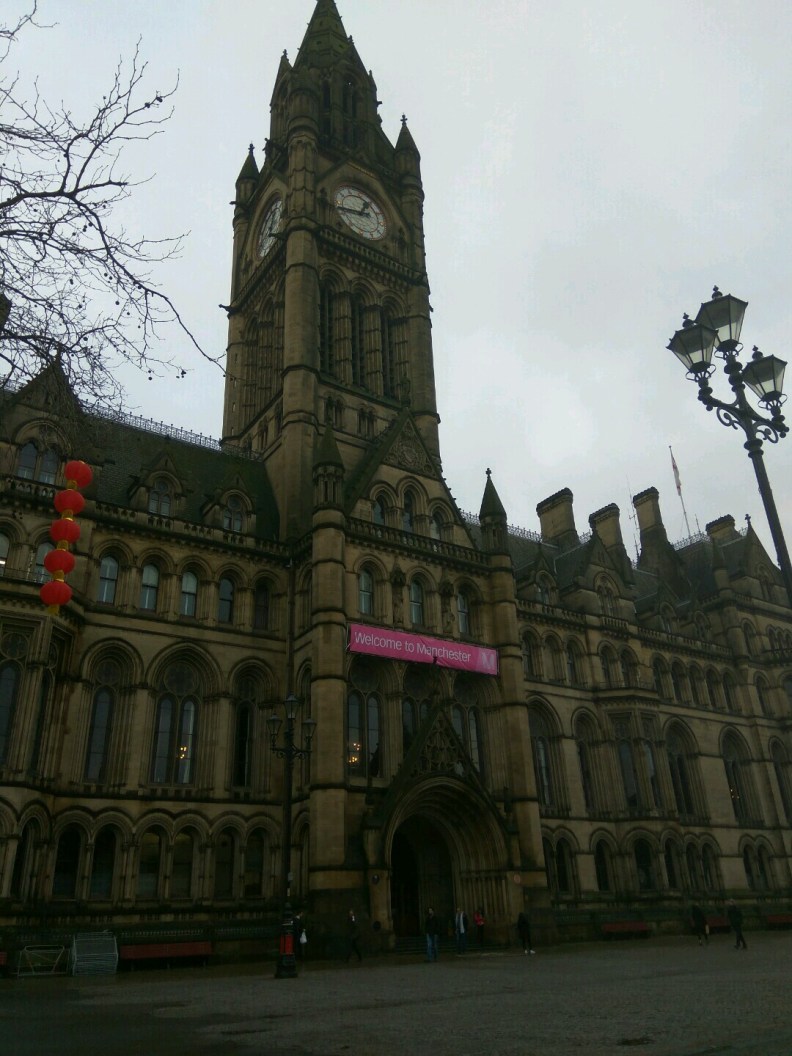 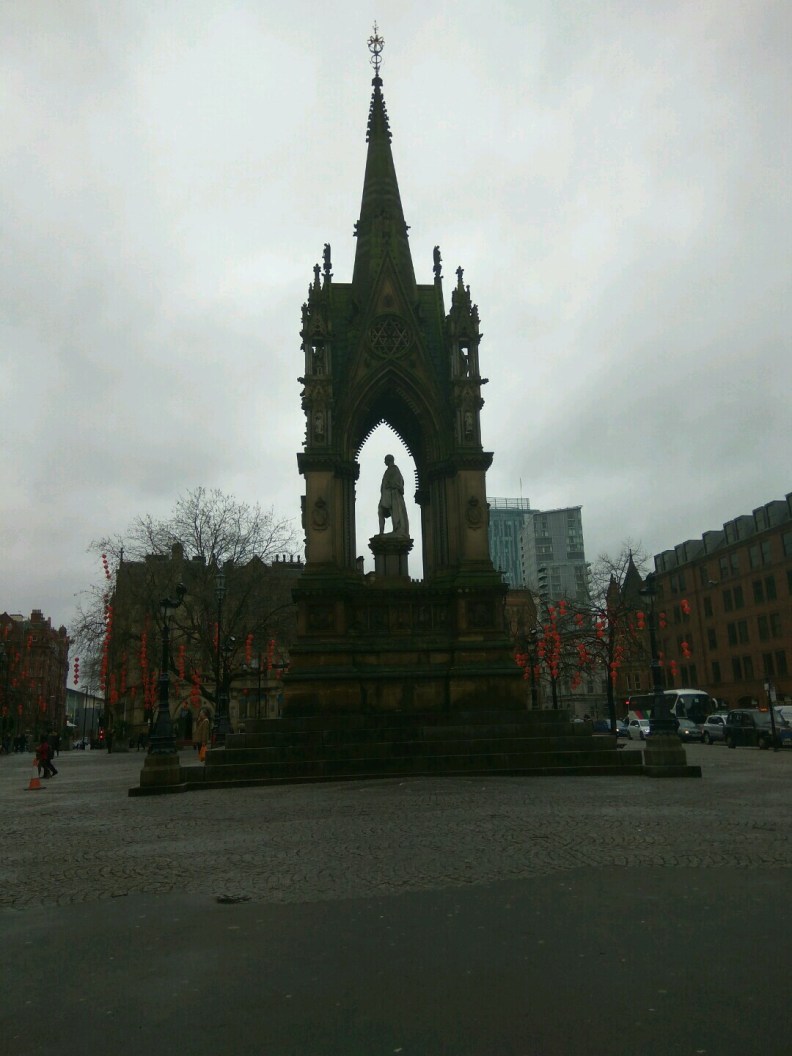 My first stop was the Manchester art gallery. 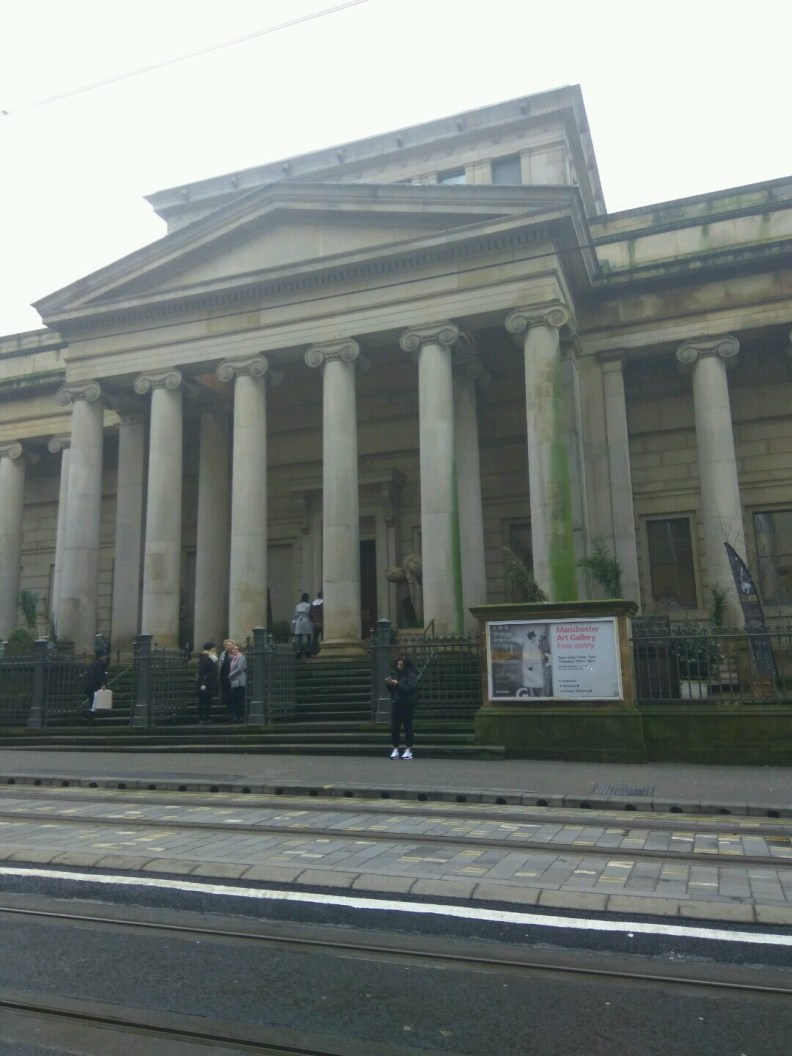 This was free! The inside was just as impressive. 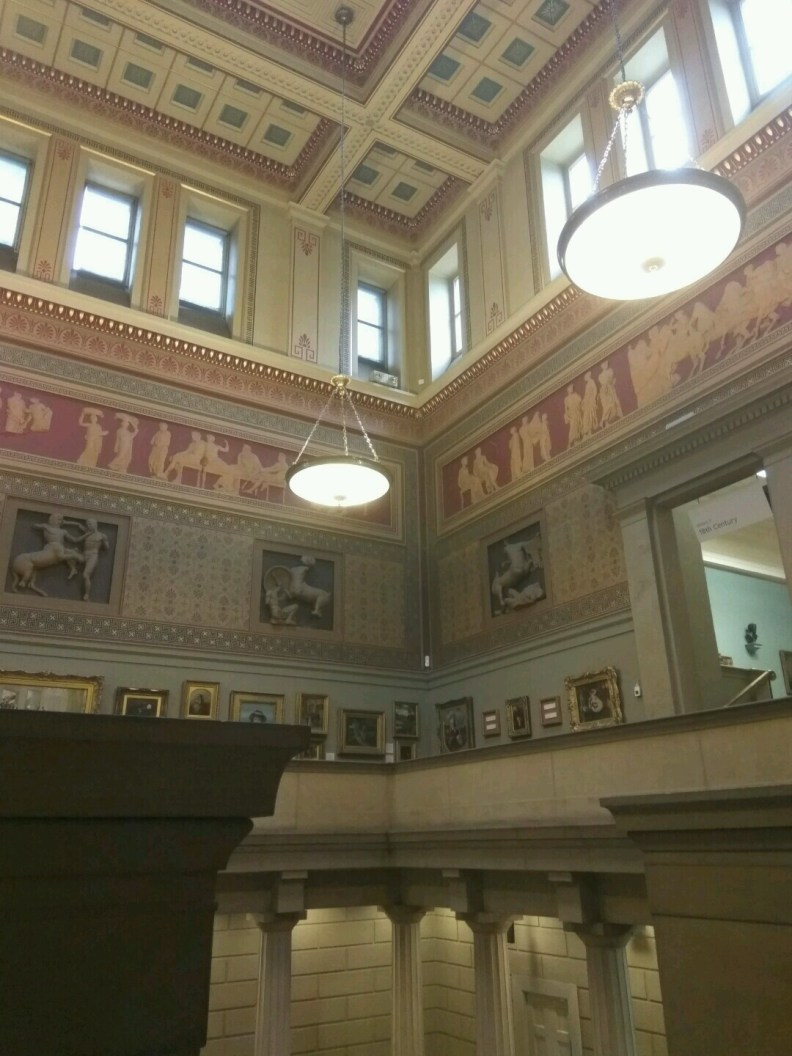 This was my favourite one: 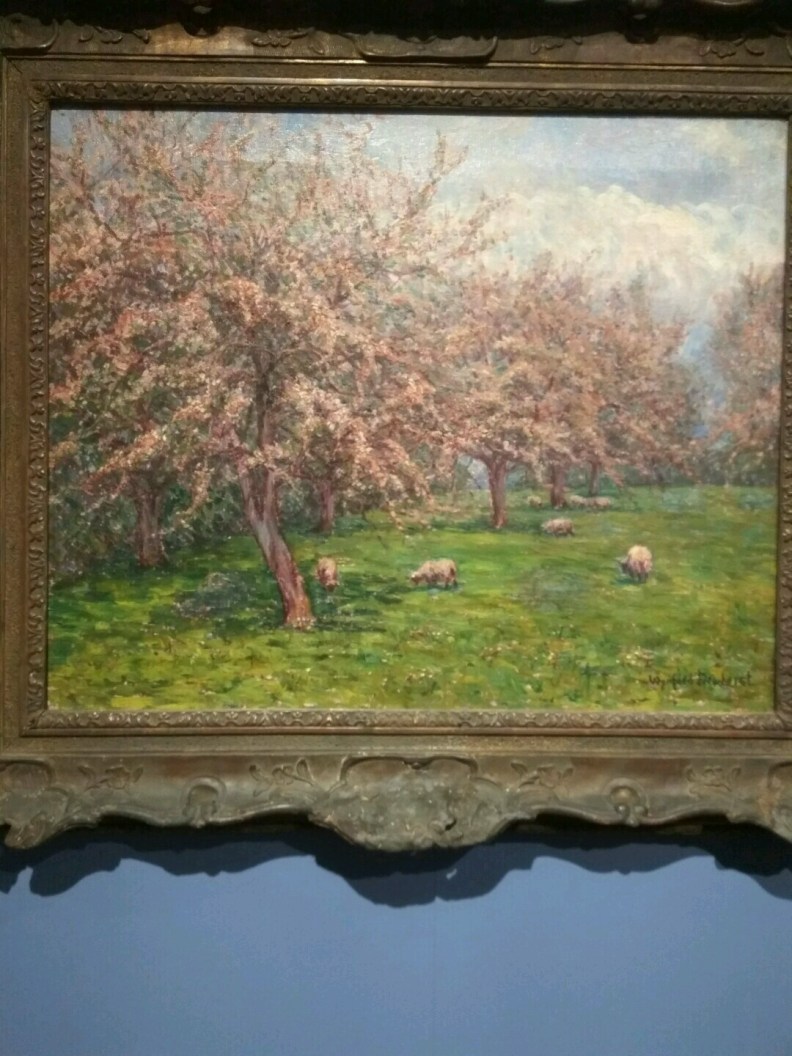 And they had an original Banksy! 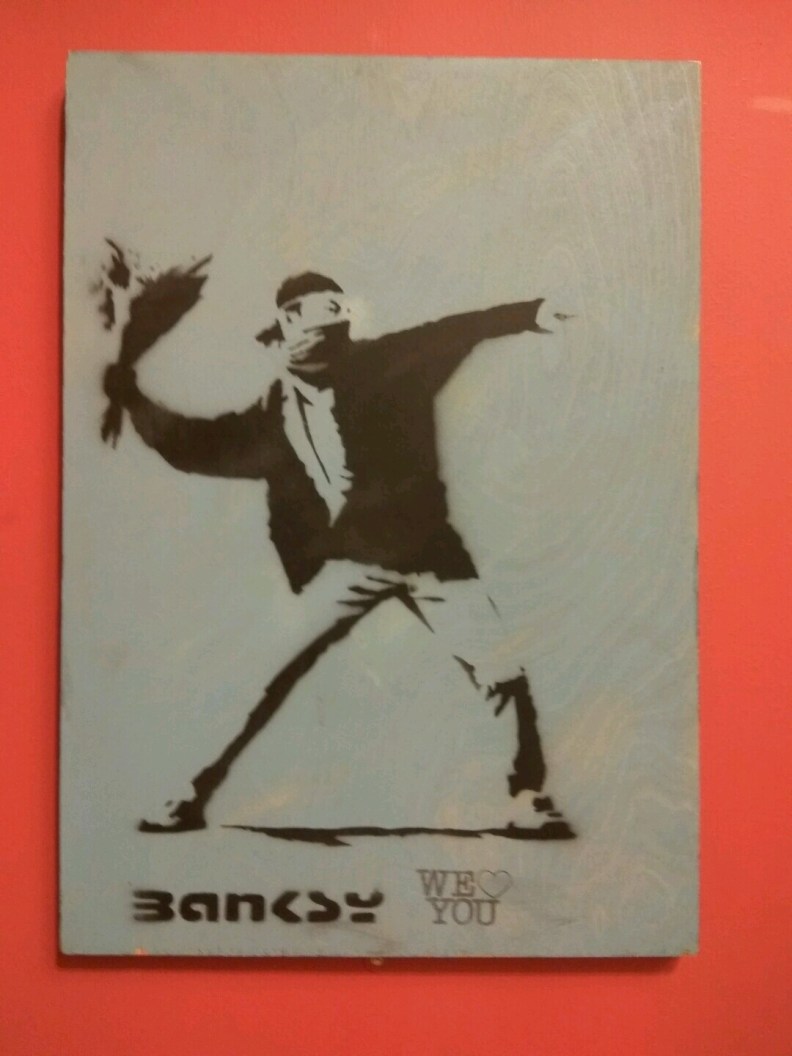 Afterwards I made my way to the John Rylands library. 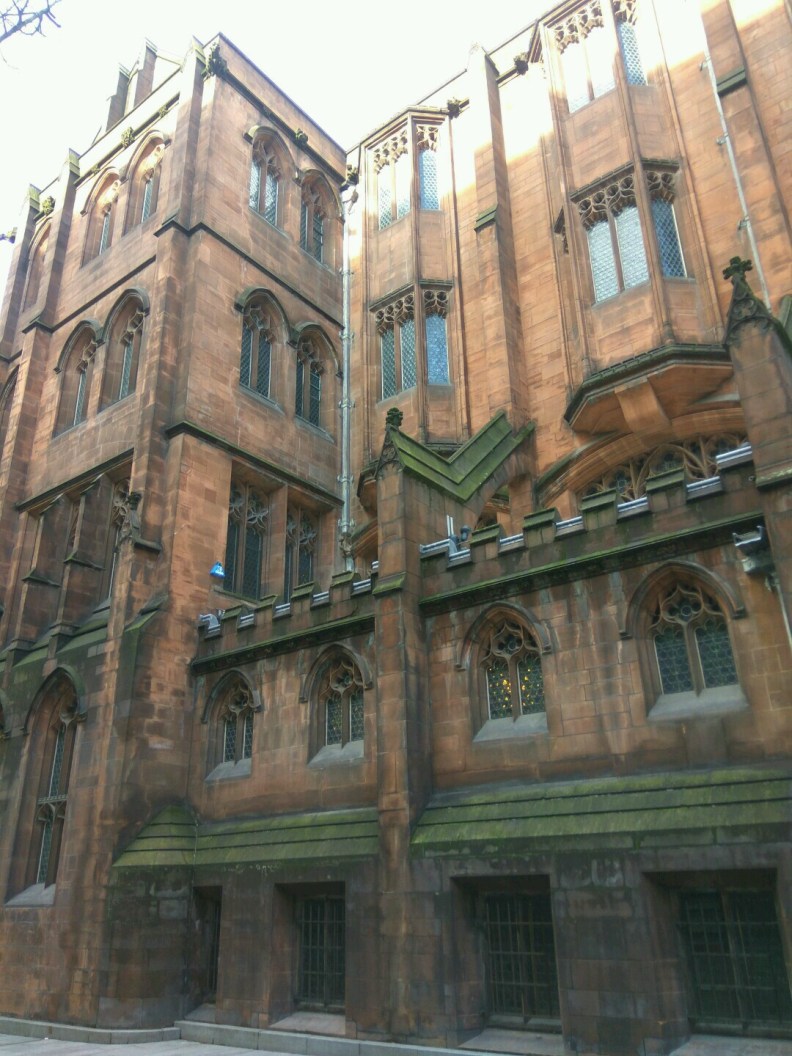 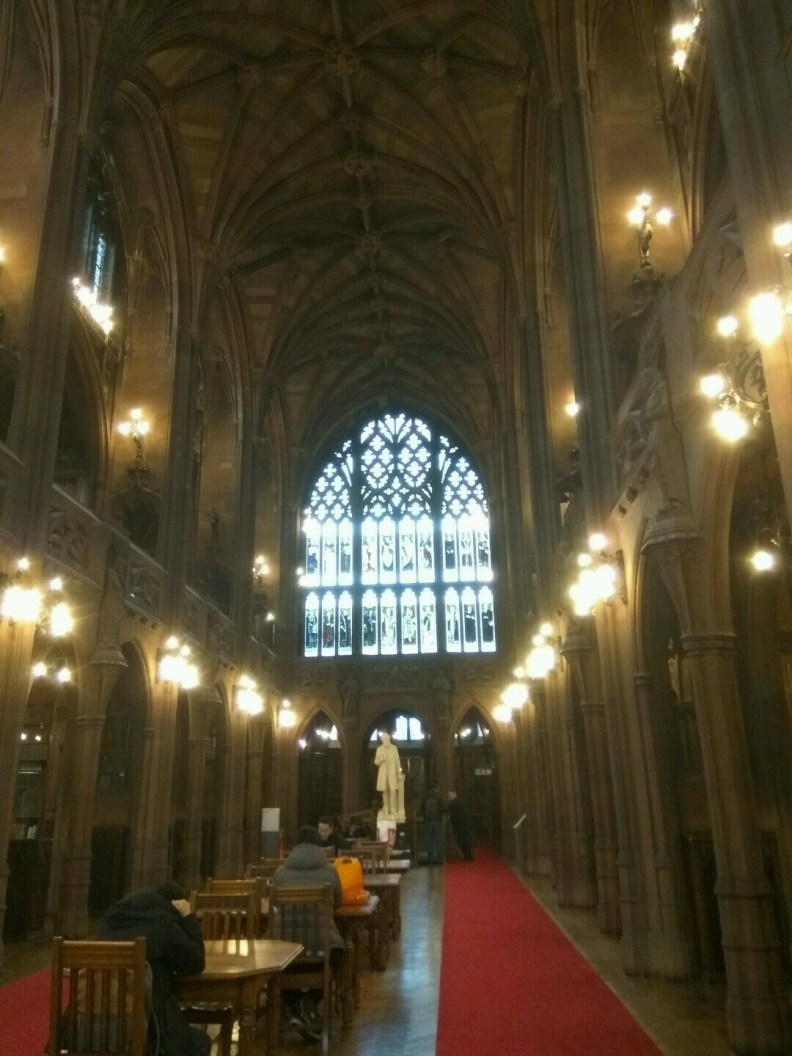 All I knew was that it was architecturally beautiful, but there were two things inside that were very interesting. The first was the first English translation of Euclid’s work, (cool math stuff!), 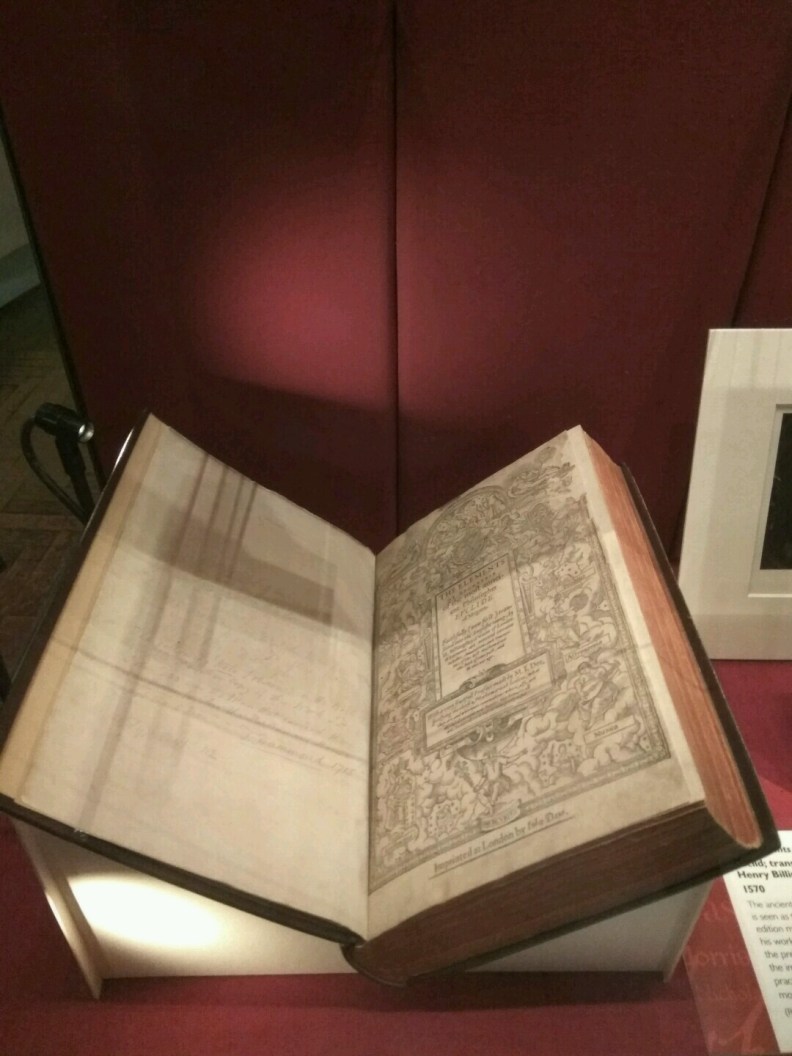 and the second is what they claim to be the oldest known fragment of the New Testament. 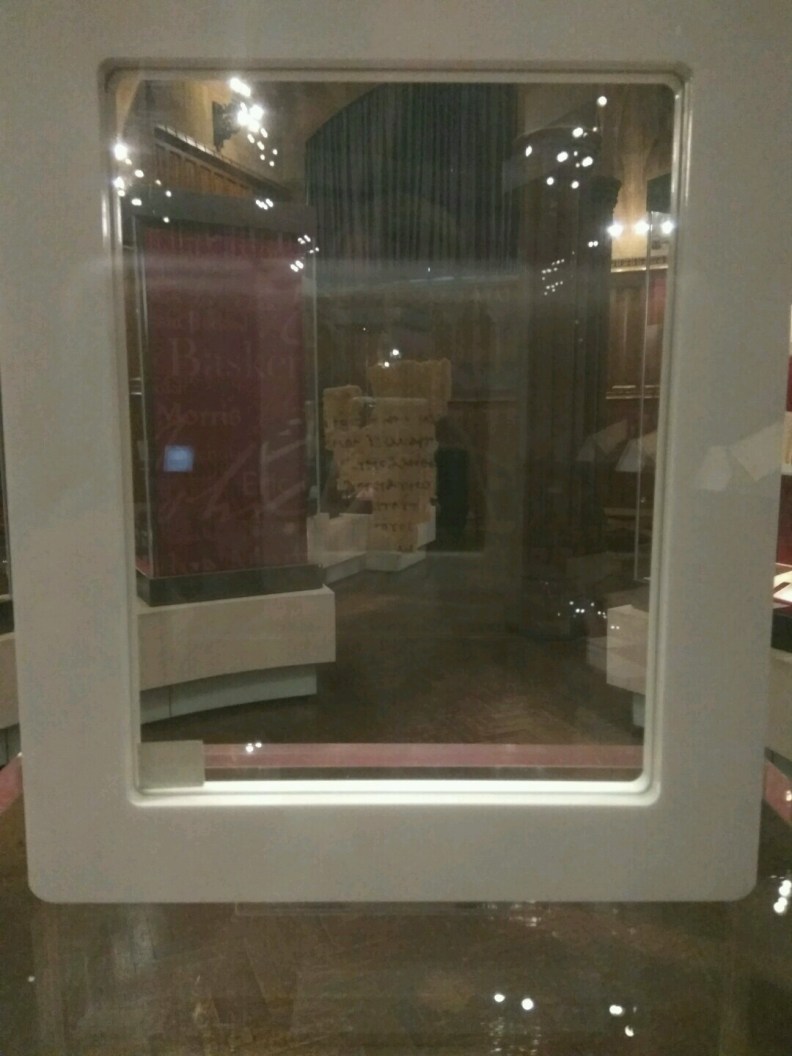 So that was more exciting than expected! On the way back to the train station I managed to find the memorial for Alan Turing who is known for cracking the Enigma Code in WW2, potentially ending the war years early. 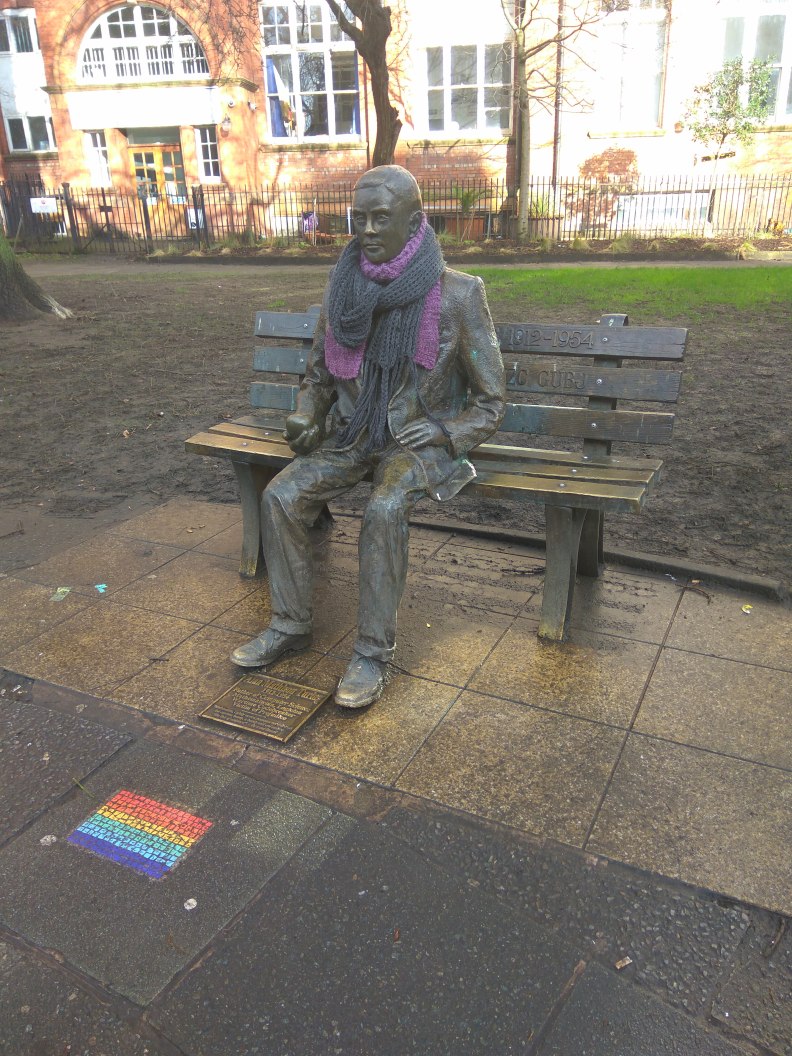 I’ve tried to adapt to the British lifestyle here, and I believe this is the first time in at least 4 years that I’ve gone two days in a row without coffee. I am, however, drinking a lot of tea. Tea and samosas have kept me happy. 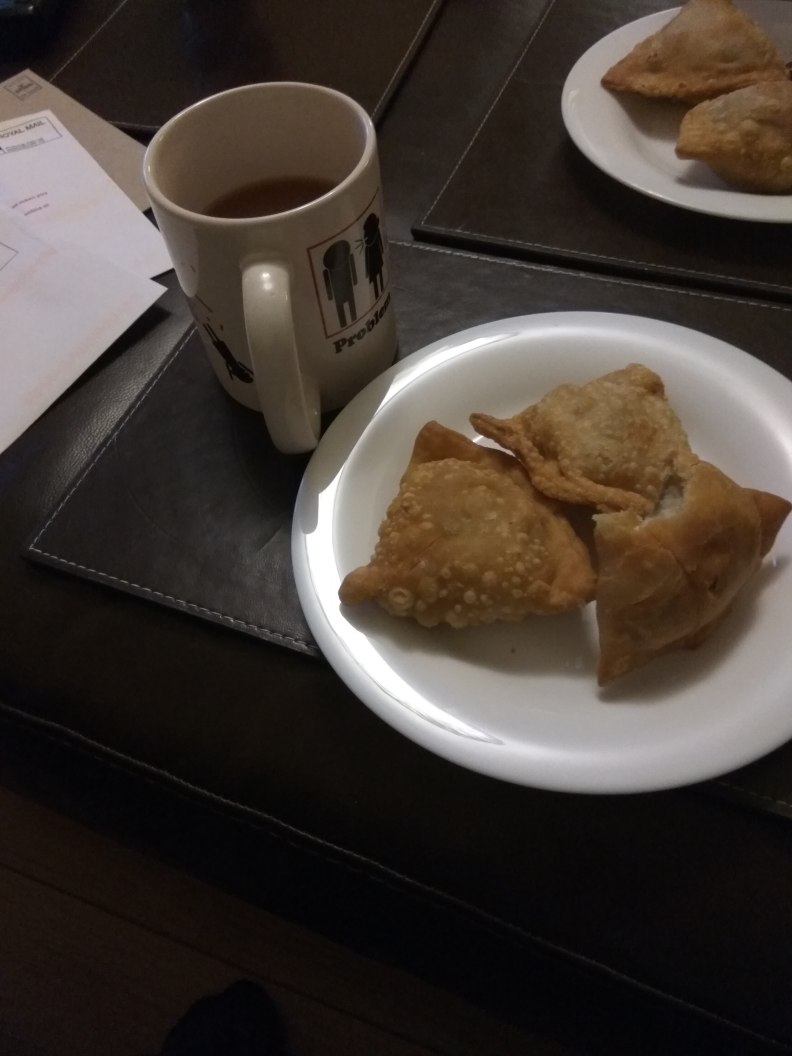 Watching British news has been interesting, the US and Brexit keep providing material. There was actually a protest in the Manchester city square last week! 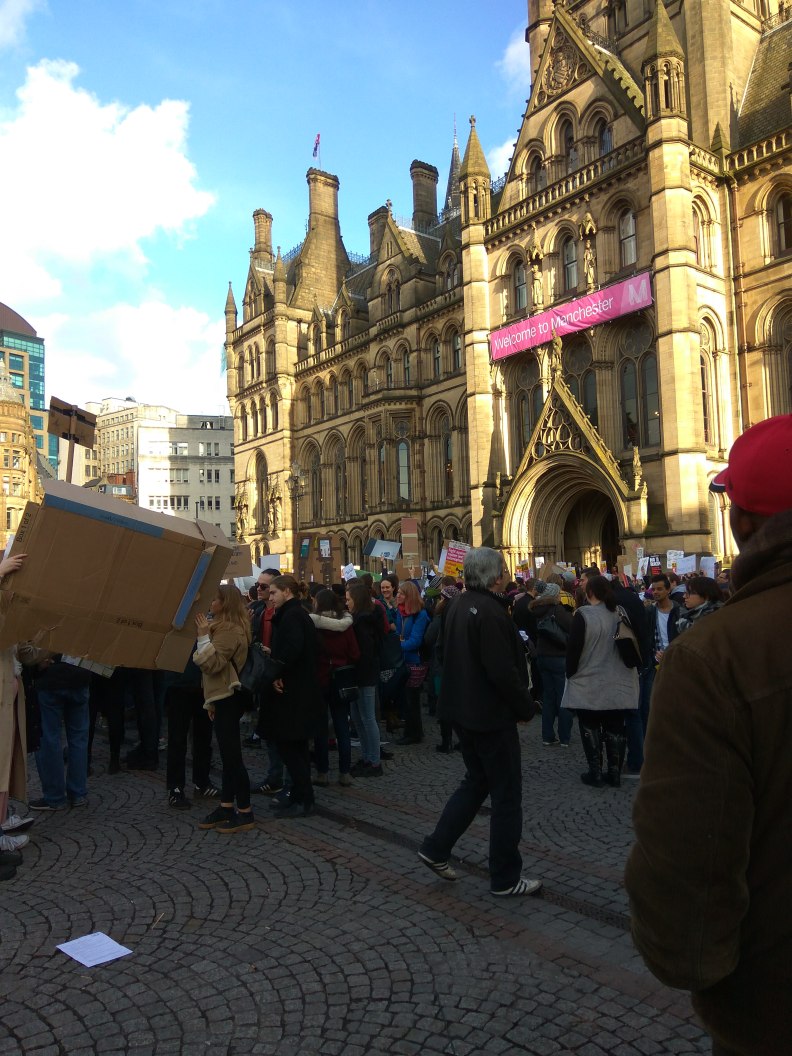 I liked the sign that said “There’s no such thing as an alternative fact.”

When it isn’t raining, Manchester can be quite nice! 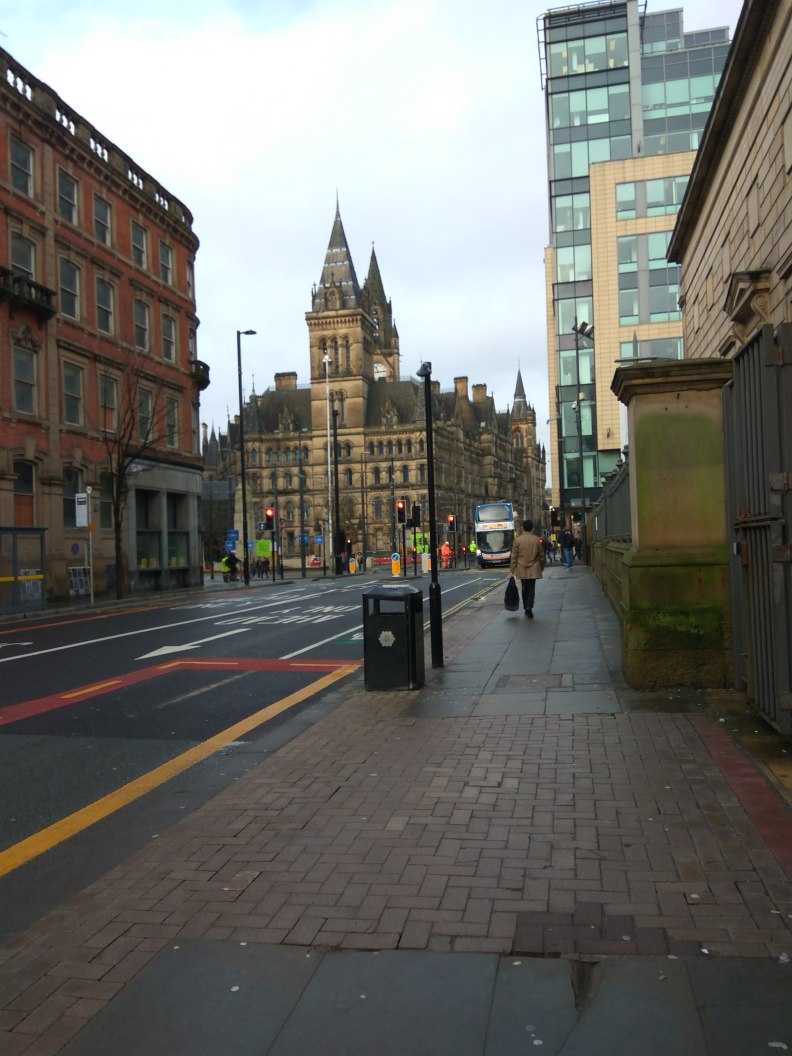 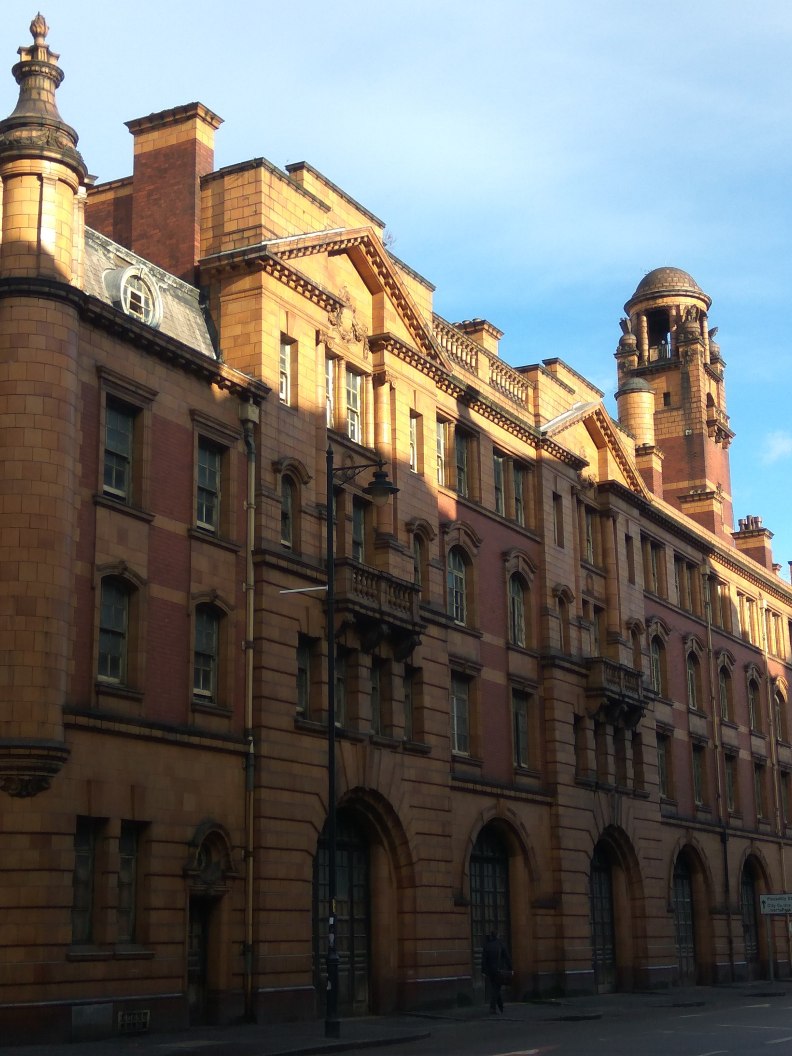 On the weekend Dalip and I visited the Manchester Cathedral and were lucky enough to be there when the choir was practicing. The acoustics were amazing, and I want to play that organ! 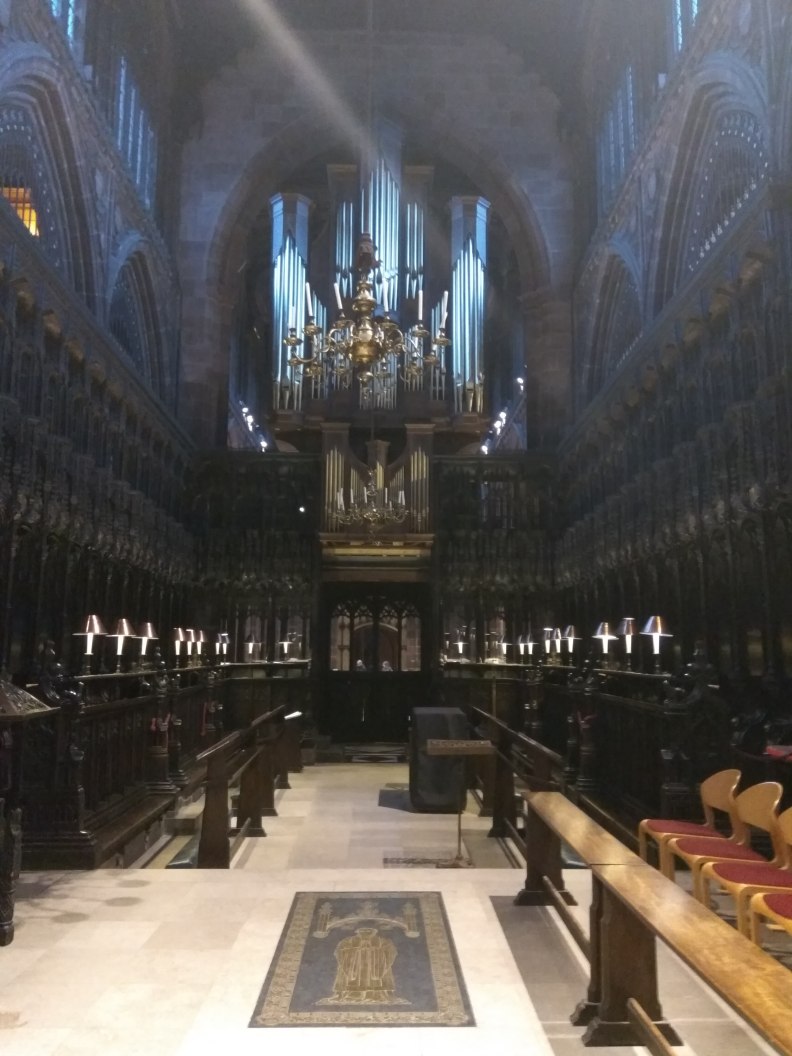 The next day, despite the rivalry with Manchester, Dalip was kind enough to bring me to Liverpool. 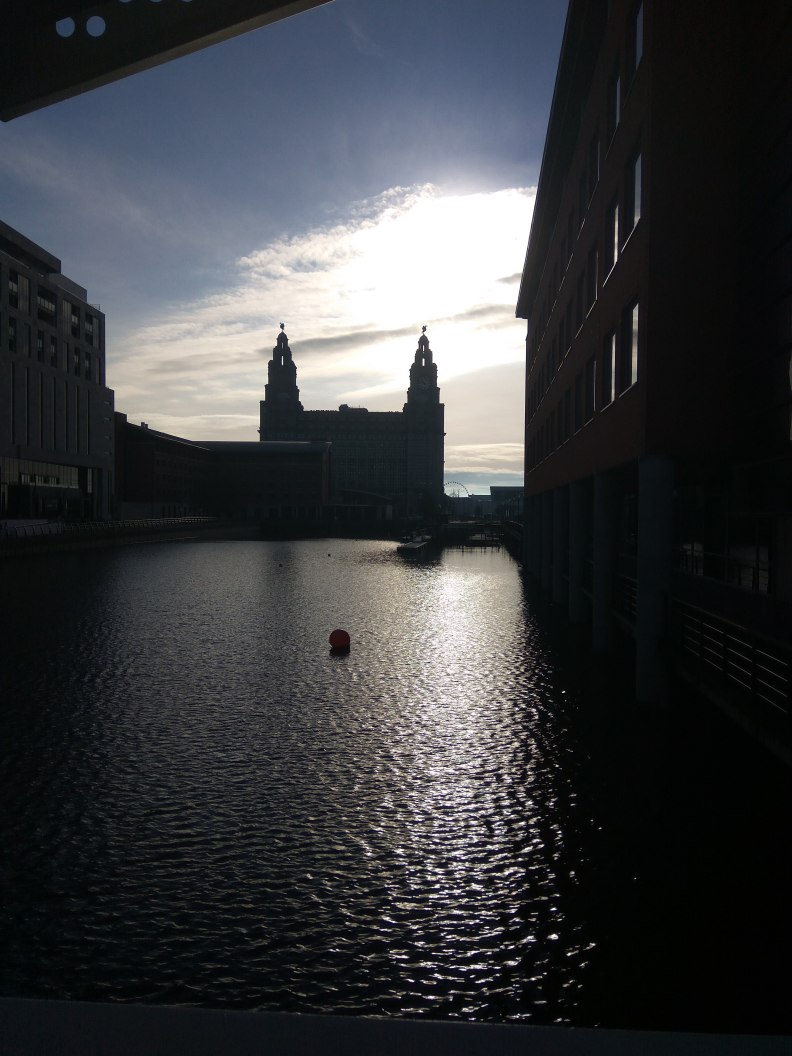 When we parked, an angry looking guy who may or may not have worked in the nearby building taught me how to make “can I help you?” sound mean. After showing him the pass he became confusingly friendly and annoyed and we were allowed to move on. The first stop was the World Museum, with exhibits about different cultures and religions. 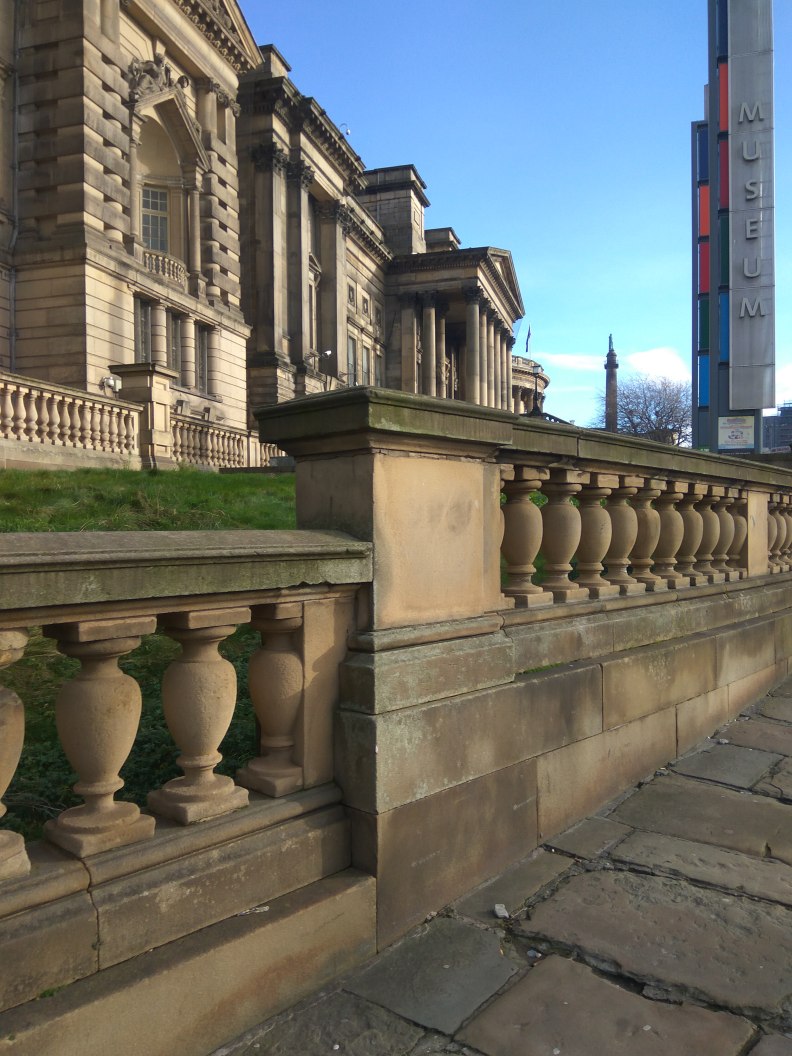 Liverpool is very nice, there seemed to be pillars and stone buildings everywhere.

We visited the Liverpool Cathedral, an imposing building overlooking the city. 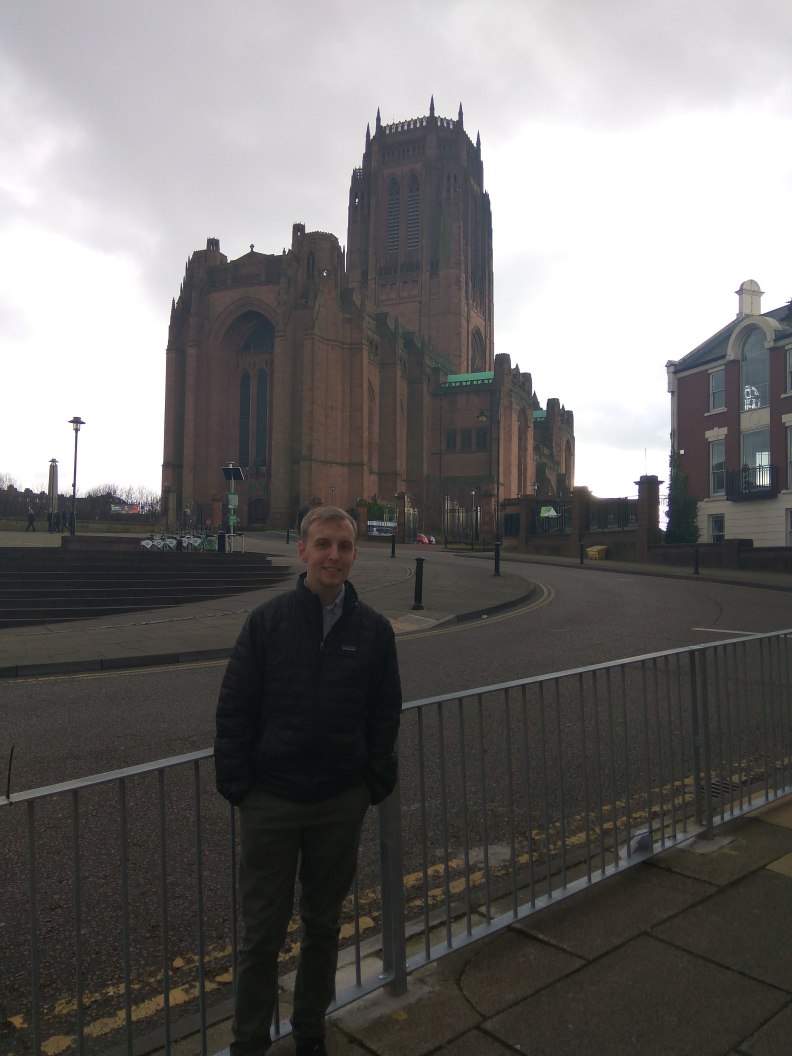 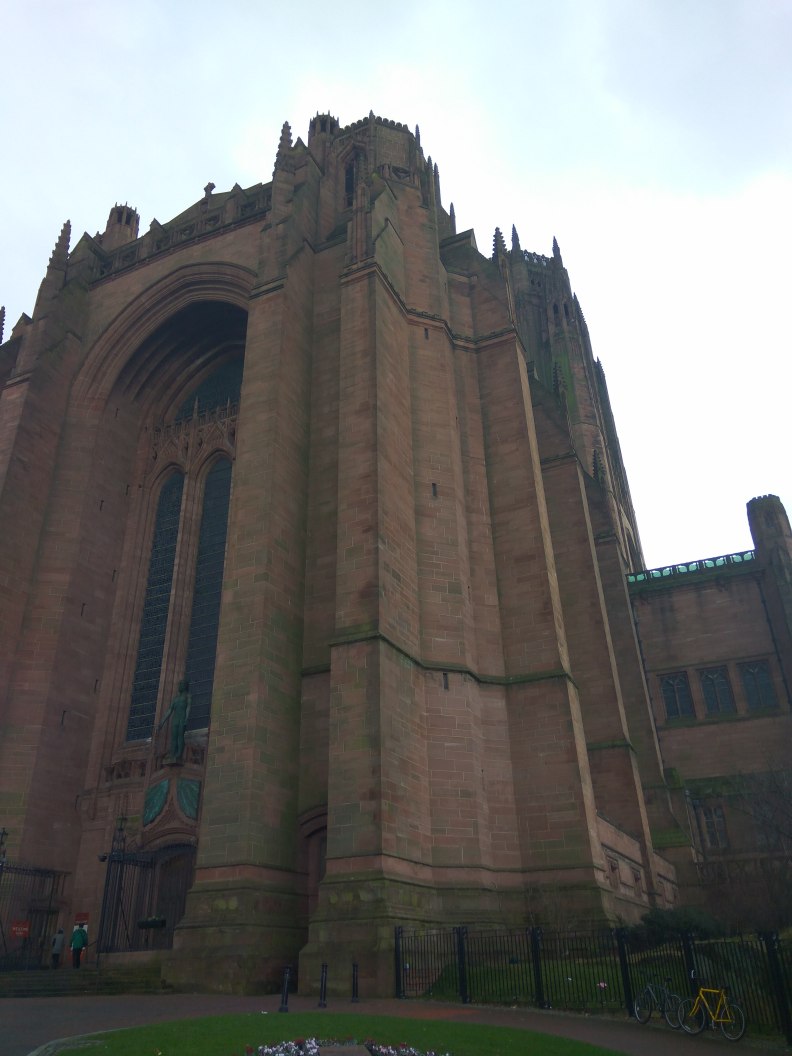 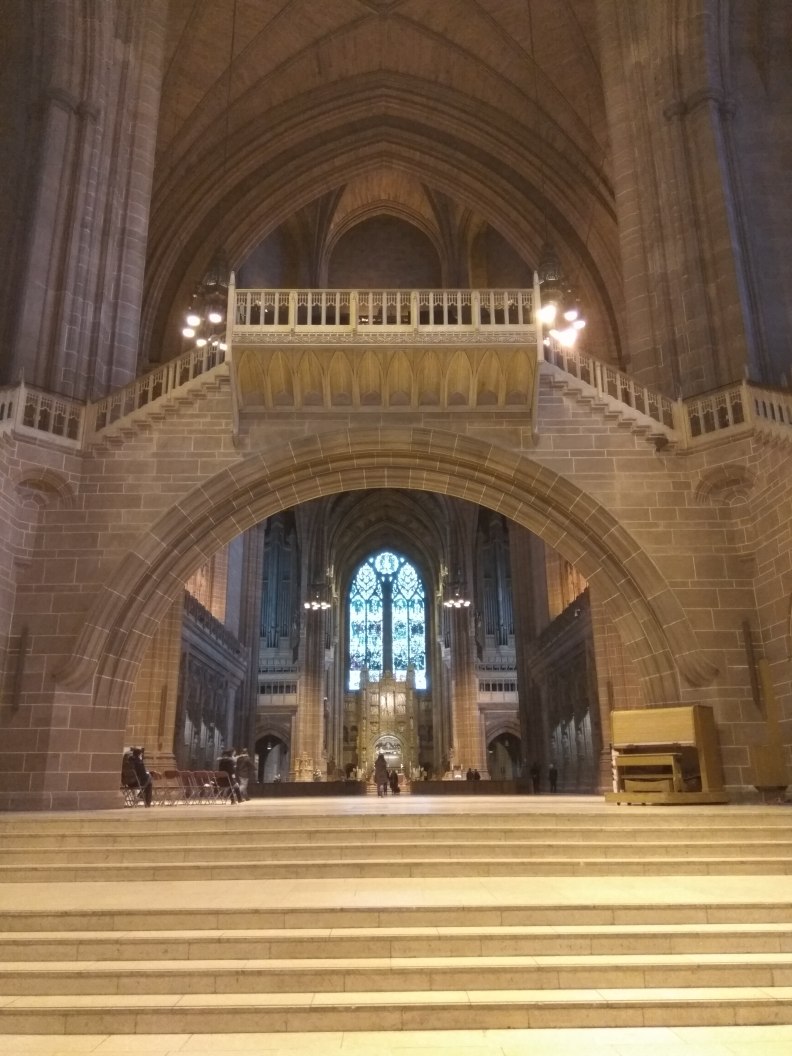 The weird thing though, was the neon pink sign at the entrance. Is it just me, or does it kind of take away from the beauty of the stained glass? 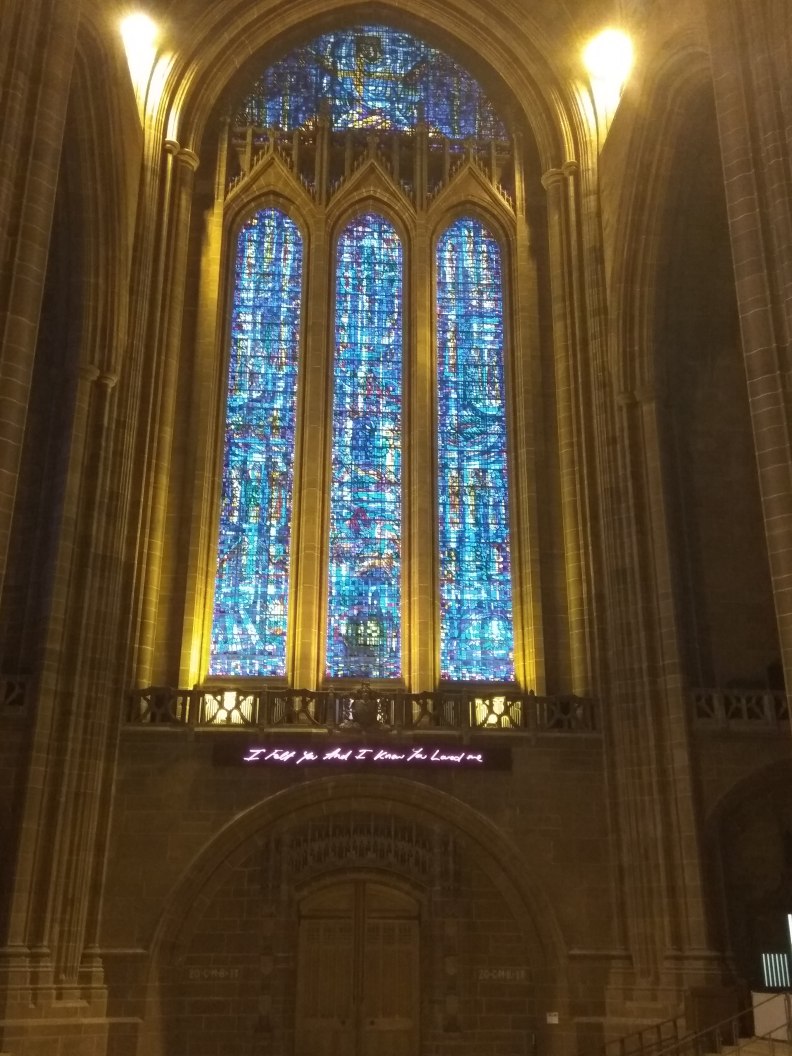 Maybe they’re trying to reach a different demographic, but I wasn’t a fan.

Luckily the docks were neon free! 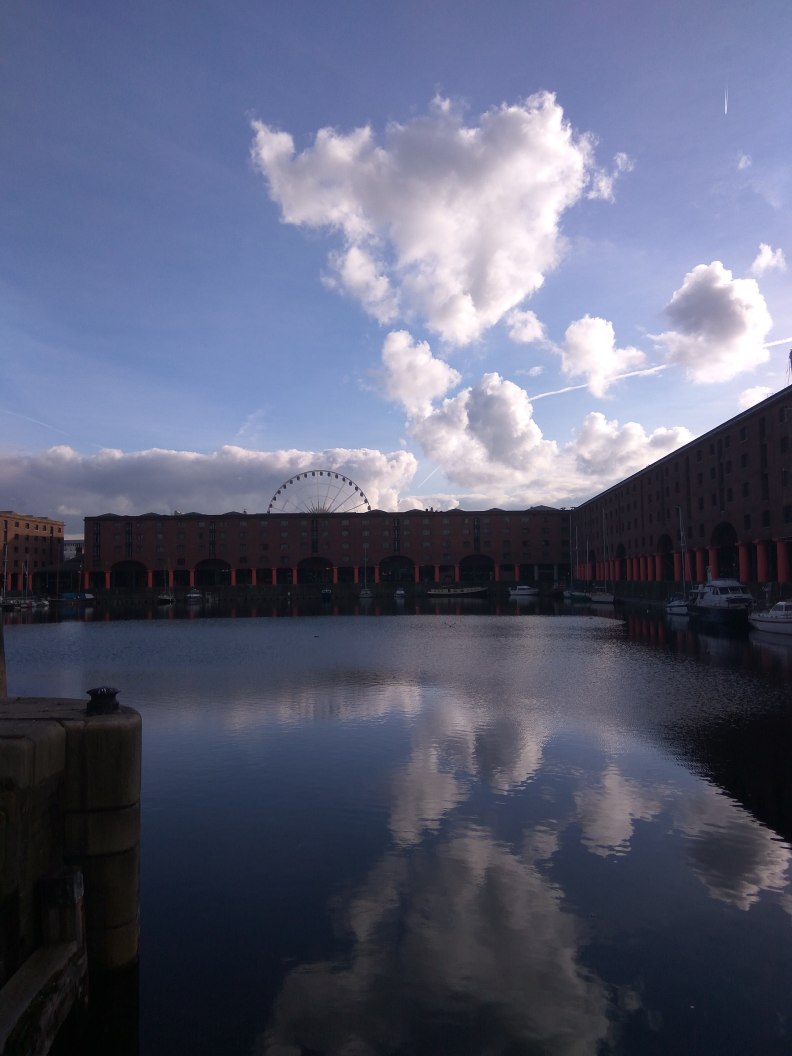 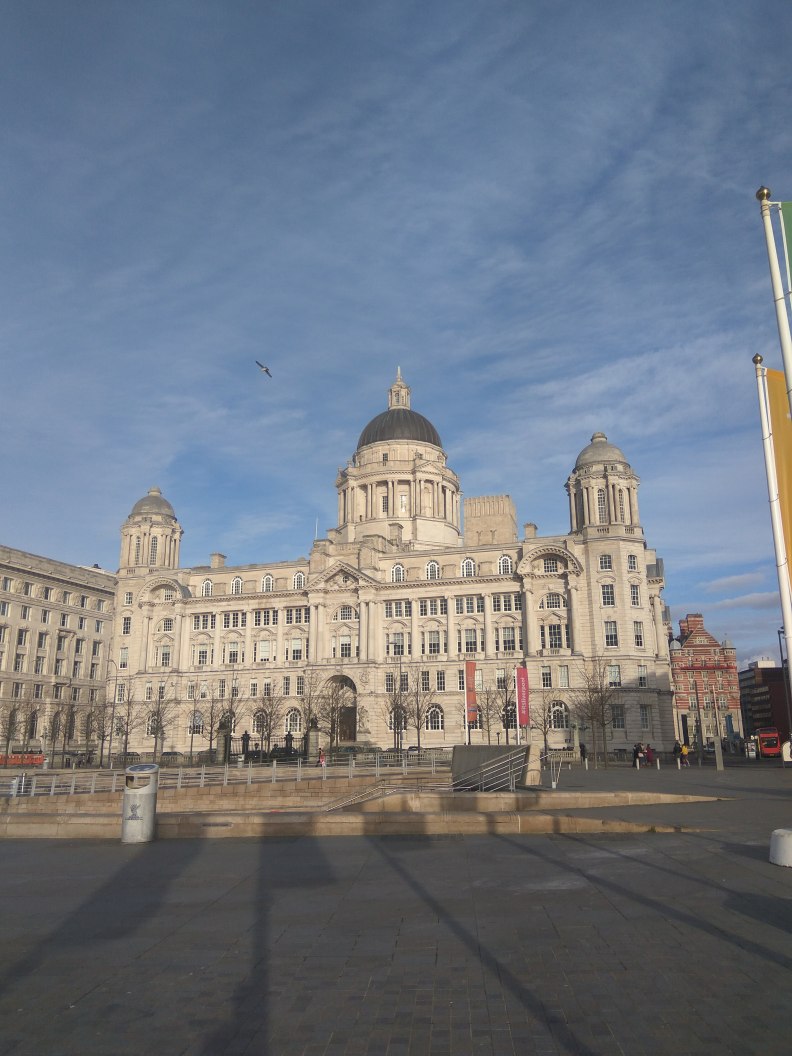 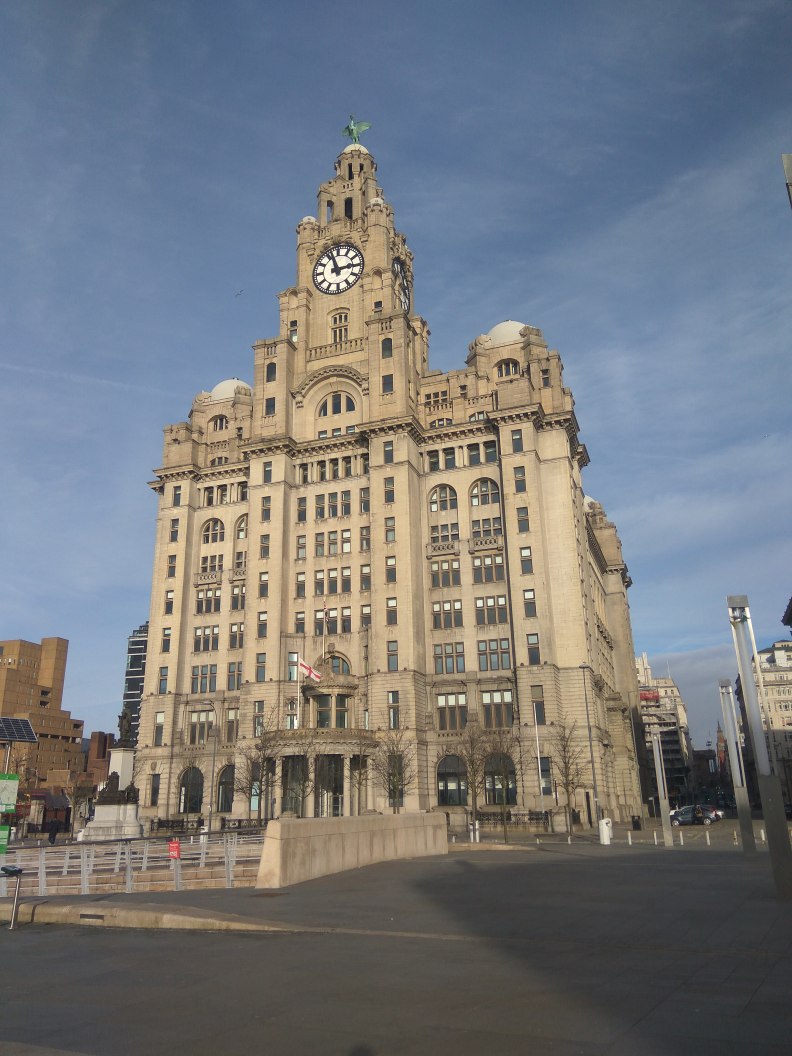 Finally, since Liverpool is where the Beatles originated, we thought we’d visit one of the many Beatles sites. We found the Casbah Coffee Club, which is where the Beatles played their first gig. Their site said open but it was locked up and nobody was around, so we were content with wandering outside and seeing the plaque. 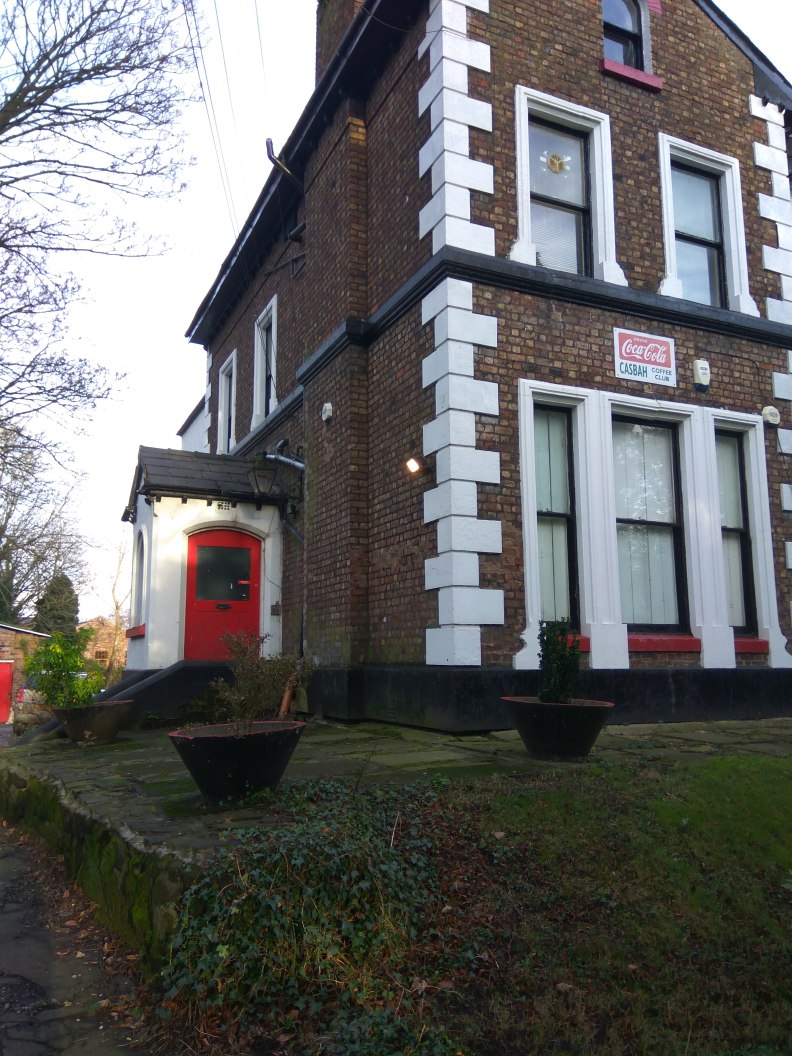 I am currently in Ireland, but I’ll be back in Manchester tomorrow. The weather isn’t quite Dubai, but it’s not Ottawa either so I’m leaning more towards grateful.