While staying in Manchester, I’ve taken the opportunity to visit Dublin since I’m so close. It was my first time staying in a hostel, and three nights accommodation plus a flight there and back cost $100. I like Europe.

I arrived around 8 in the evening, ready to find the hostel and get to bed early. After spending an hour in an immigration line with a wait estimate of “10 minutes” posted, (to mock me presumably), I managed to find the shuttle from the airport downtown. I was immediately pleased with my hostel location, since it had a nearby landmark that made returning to it easy. 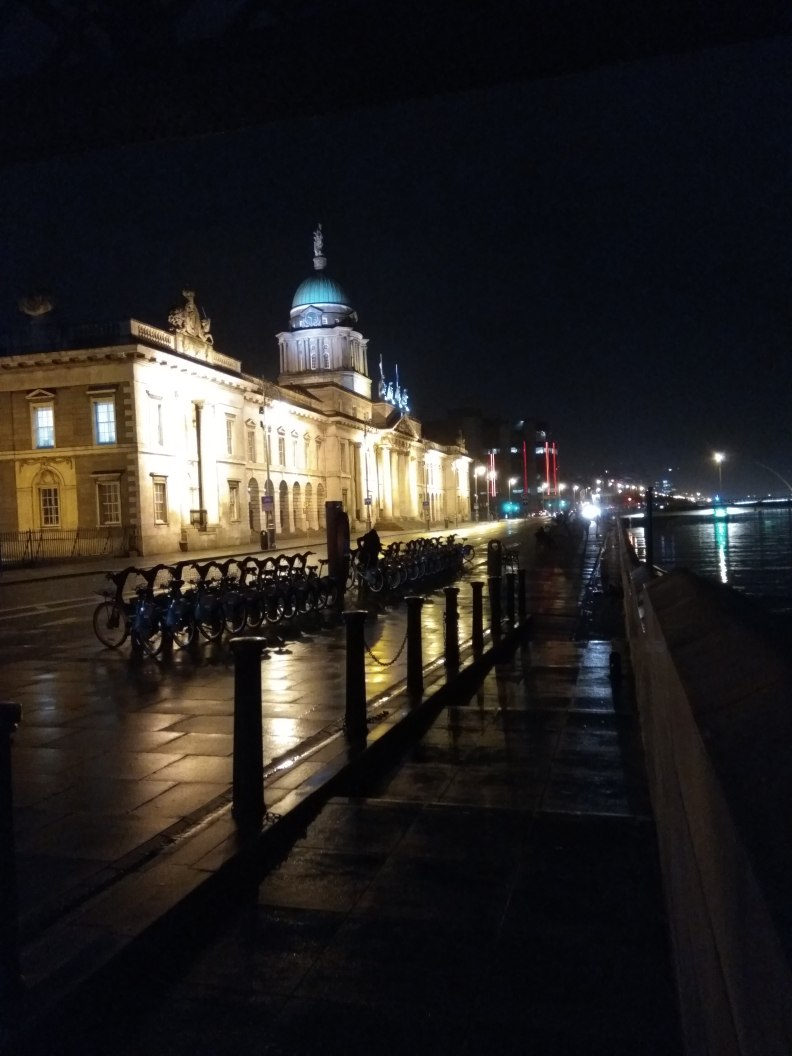 I quickly discovered that Dublin is a really easy city to navigate, as most of the sites are situated around the river running through it.

First thing, I walked over to Trinity College. I was excited to see it not only because it’s Ireland’s most famous university, but also because it is where the writers Bram Stoker (Dracula) and Oscar Wilde (The Picture of Dorian Gray) both studied. Furthermore, it is home to Ireland’s national treasure, the Book of Kells. The Book of Kells is an illuminated manuscript of the 4 gospels. One of its most famous pages is the Chi Rho page.

I wasn’t allowed to take a picture of the actual book but don’t worry, it was quite fancy.

After the book was a library with some more displays. What I was really surprised to find in this library, because I didn’t expect to find it anywhere, was the Irish Harp! 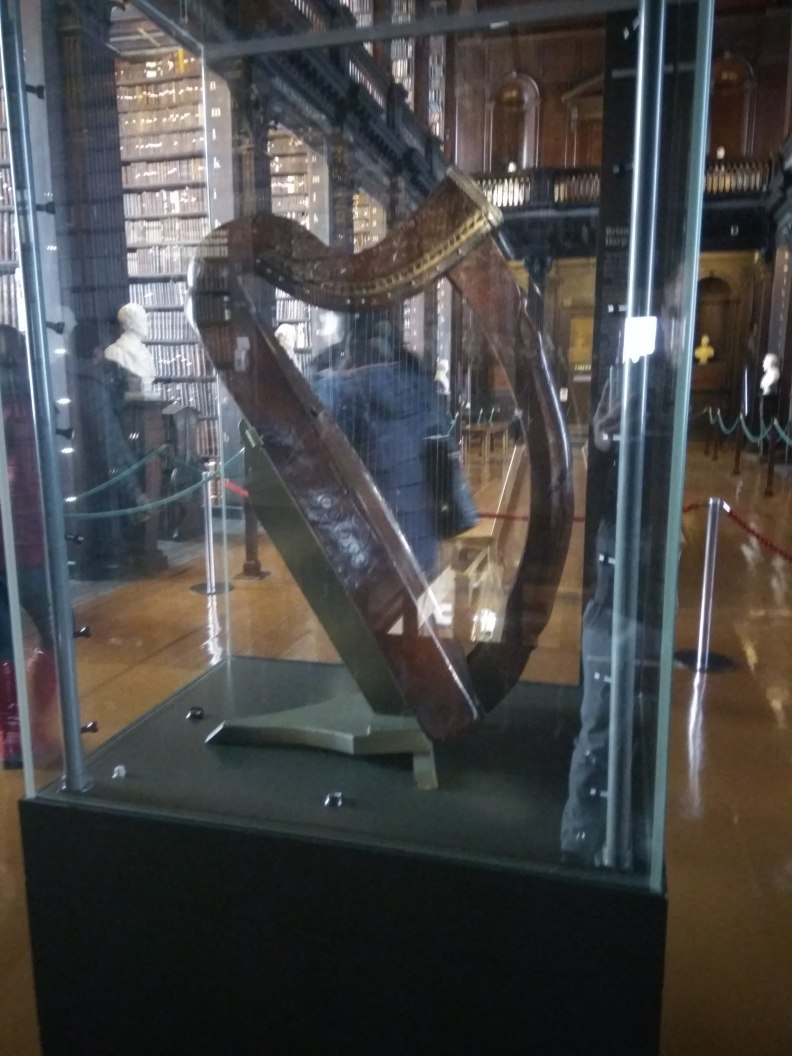 One of the symbols of Ireland, this is one of the oldest Gaelic harps, and possibly the oldest in the world. I believe it’s the one on the Irish coat of arms.

The next stop was Dublin Castle, which is right in amongst the regular Dublin city buildings. 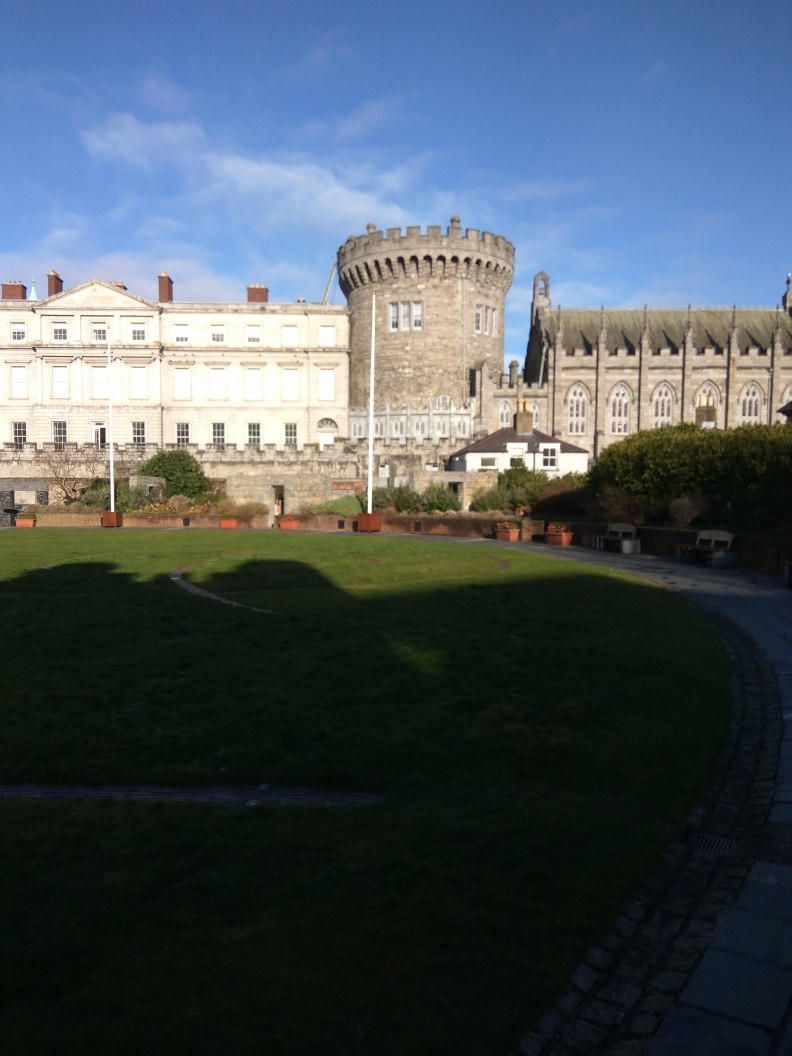 The garden was nice, 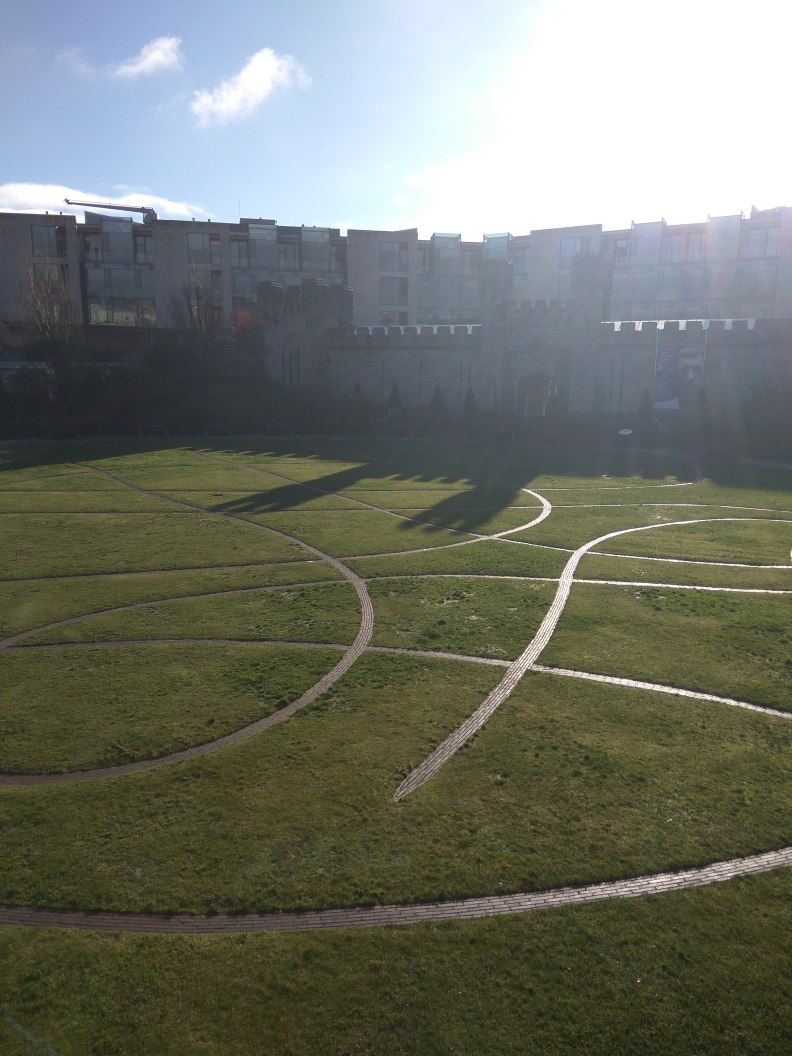 and it was impressive seeing this in the middle of the city. 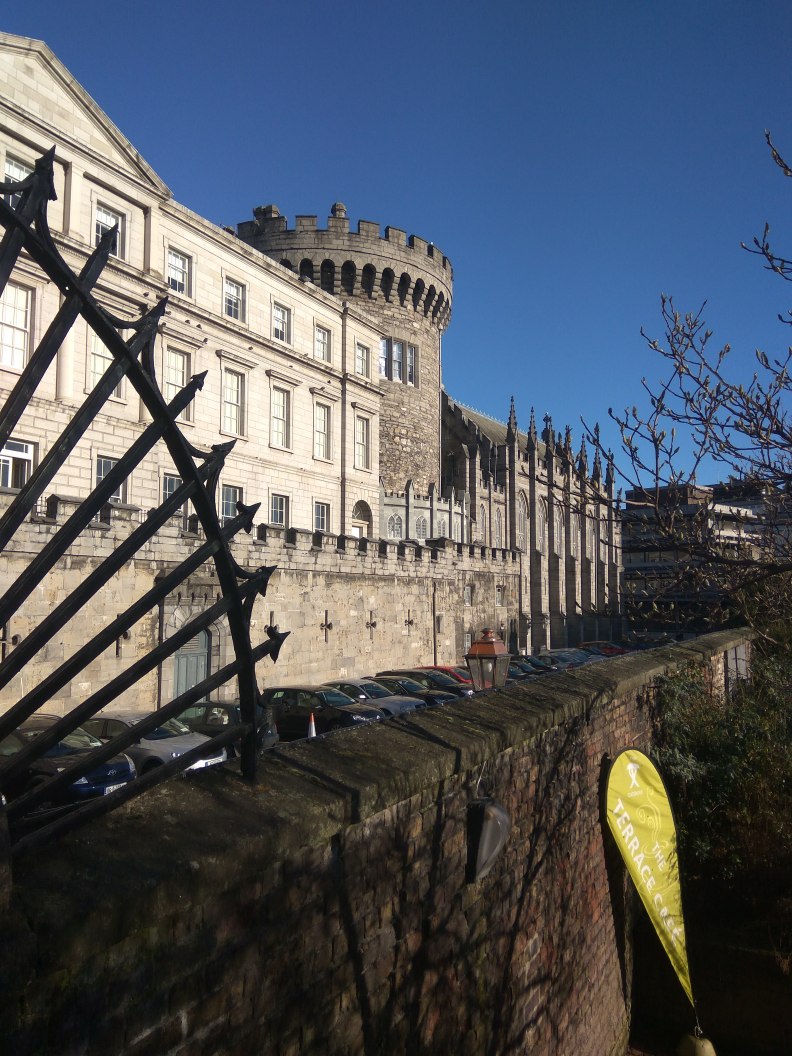 I only walked around outside of the castle, and continued on to the Chester Beatty Library a block away. I didn’t really have any expectations going in, but I’m glad I did! The most interesting thing to me was seeing actual papyrus pieces of the Egyptian Book of the Dead.

So far I was only required to pay to see the Book of Kells, but I did end up paying to go into St. Patrick’s Cathedral, since that seemed somewhat fundamental. 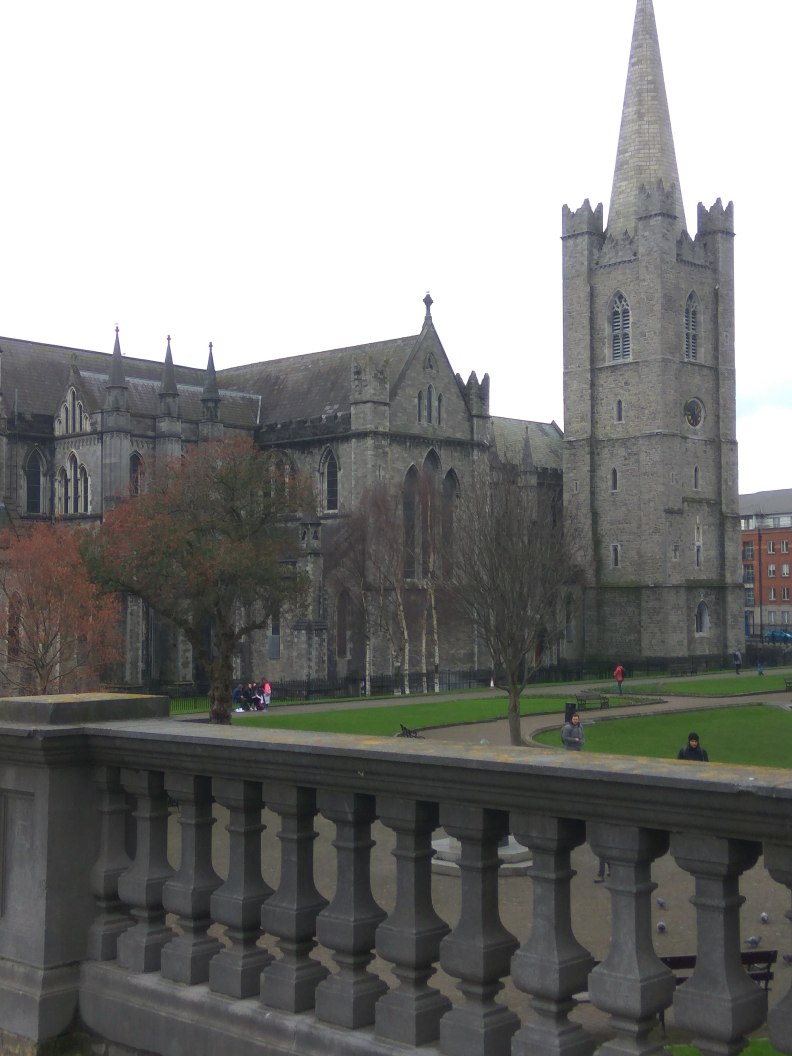 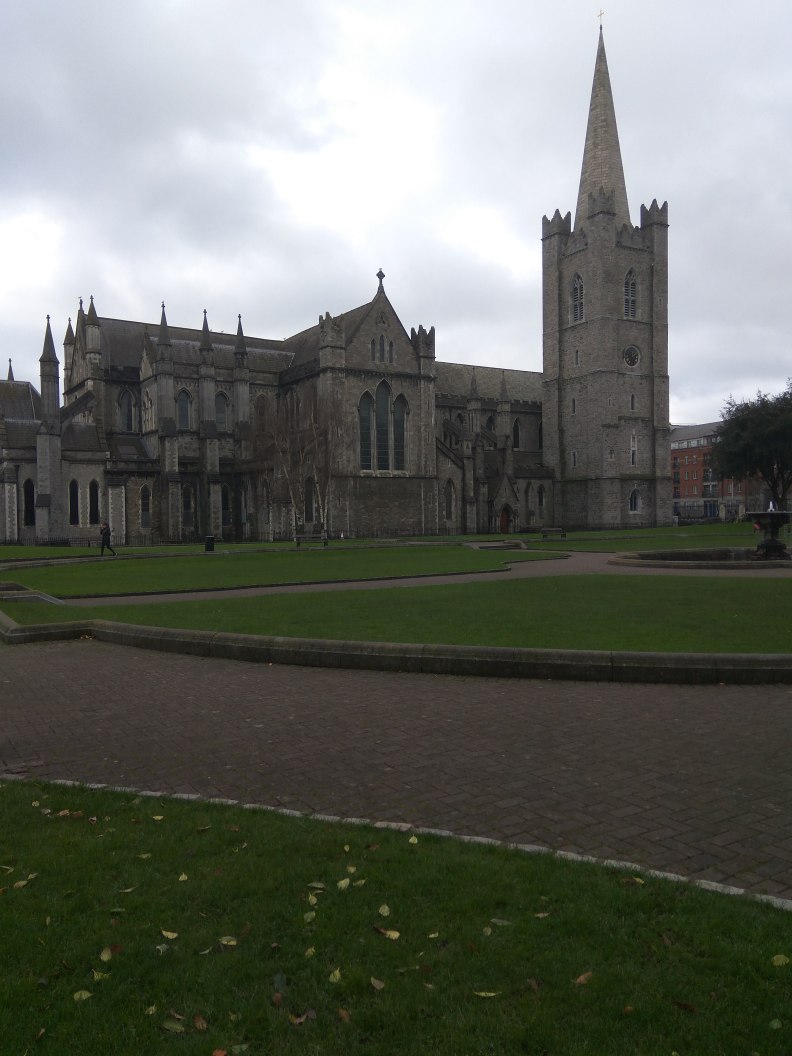 As usual, the inside was impressive. I particularly liked the floor, and the Celtic knots in the artwork. 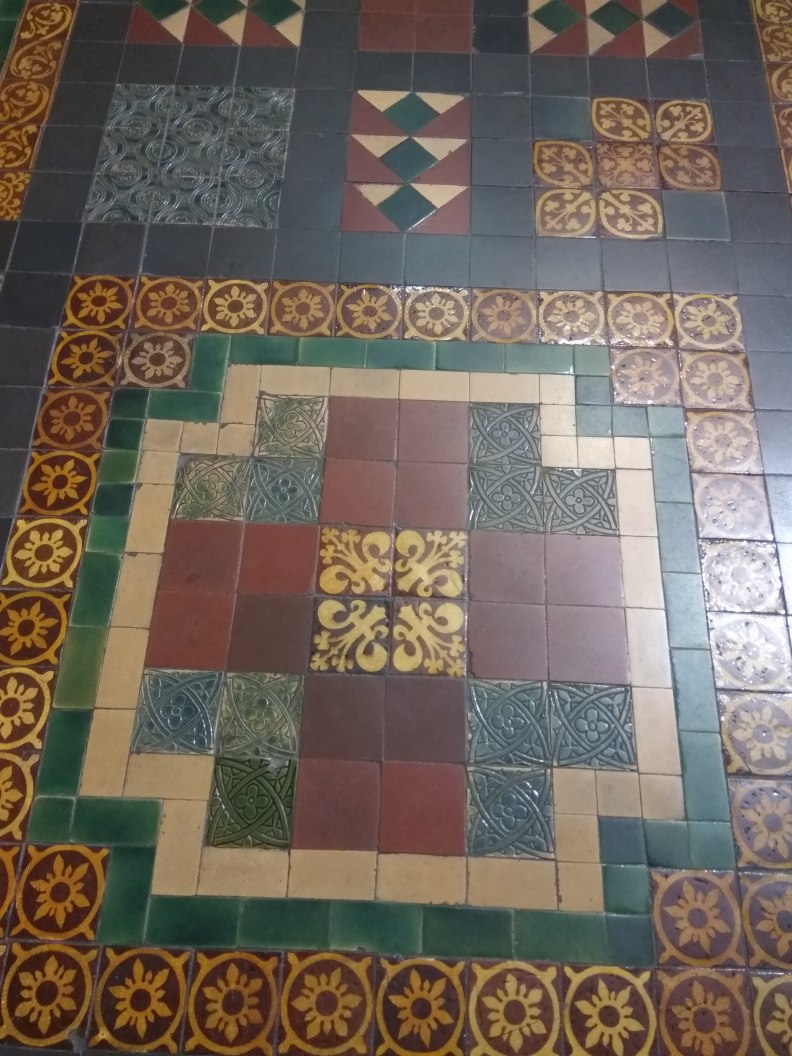 I saw some tiles with a boar on them and wondered what the significance was, so I asked a volunteer to see if she knew. What started with a question about a floor tile turned into a discussion about Irish culture and history. The boar is on the coat of arms of the Guinness family, who paid to restore the inside of the cathedral. I was told that the Guinness family are very well thought of in Ireland, due to how highly they value their employees and the community. When they started in 1759, they provided their employees with both healthcare and housing! As we walked through the church I asked about the Irish language, as all signs so far had both English and Irish on them. Irish is taught in schools, but no longer widely spoken. We got to talking about current affairs, and I asked what the attitudes were in Ireland towards refugees. She said that they were mostly positive, because the Irish had once been those refugees during the Great Famine. When she mentioned that the Irish people are very friendly, I started thinking that the Irish and Canadians have a lot in common. We are both open, friendly nations that have experienced a loss of culture. There was a show on here in the UK called “Canada’s Dark Secret” that reported on the treatment of aboriginal people, and how their languages and cultures were actively stamped out, much like Irish under the English.

With much to keep me thinking, I continued from the cathedral downtown. Which of course is beautiful. I decided to check out the Guinness Storehouse, and walked by the river trying to find it. I didn’t go in, because I wasn’t quite as interested as it was expensive, but it allowed for some exploring of Dublin. (And its coffee shops!) On the way back to the hostel I managed to find Temple Bar, which looked like the type of place that sells tourists water for $10, so I continued on my way. 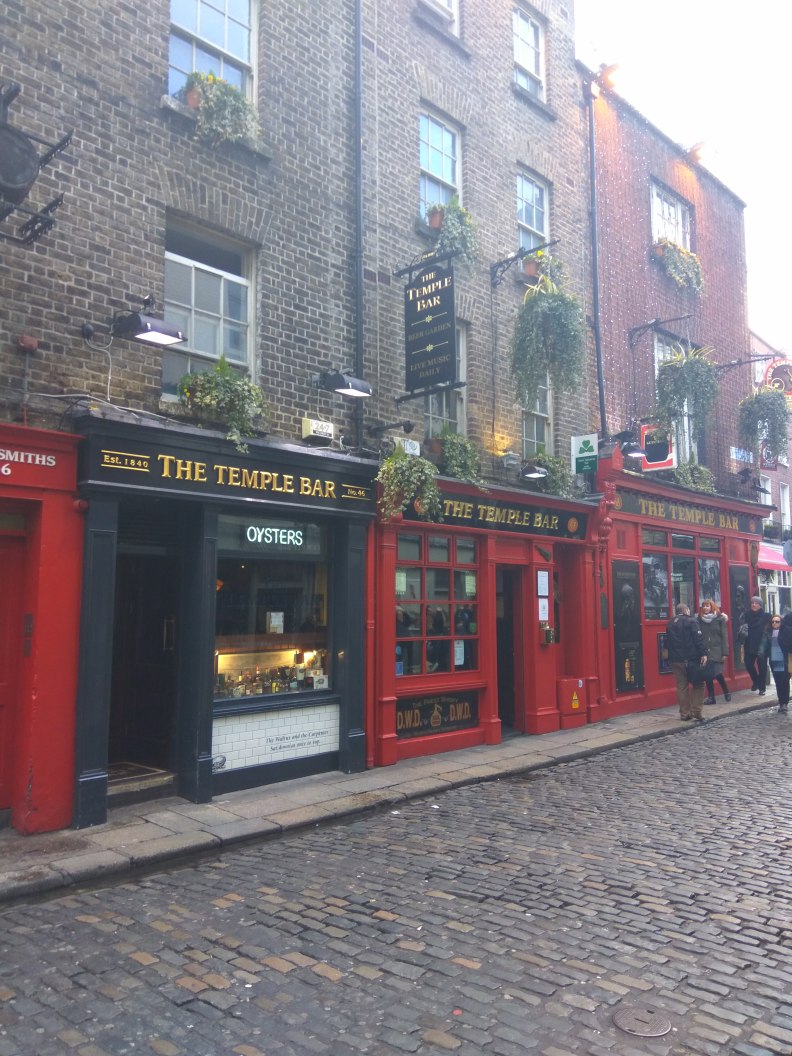 Upon returning to the hostel, I was invited out to explore some more with a really nice Spanish guy. We met up with his friend, and she brought us to a bar built in what used to be a church. 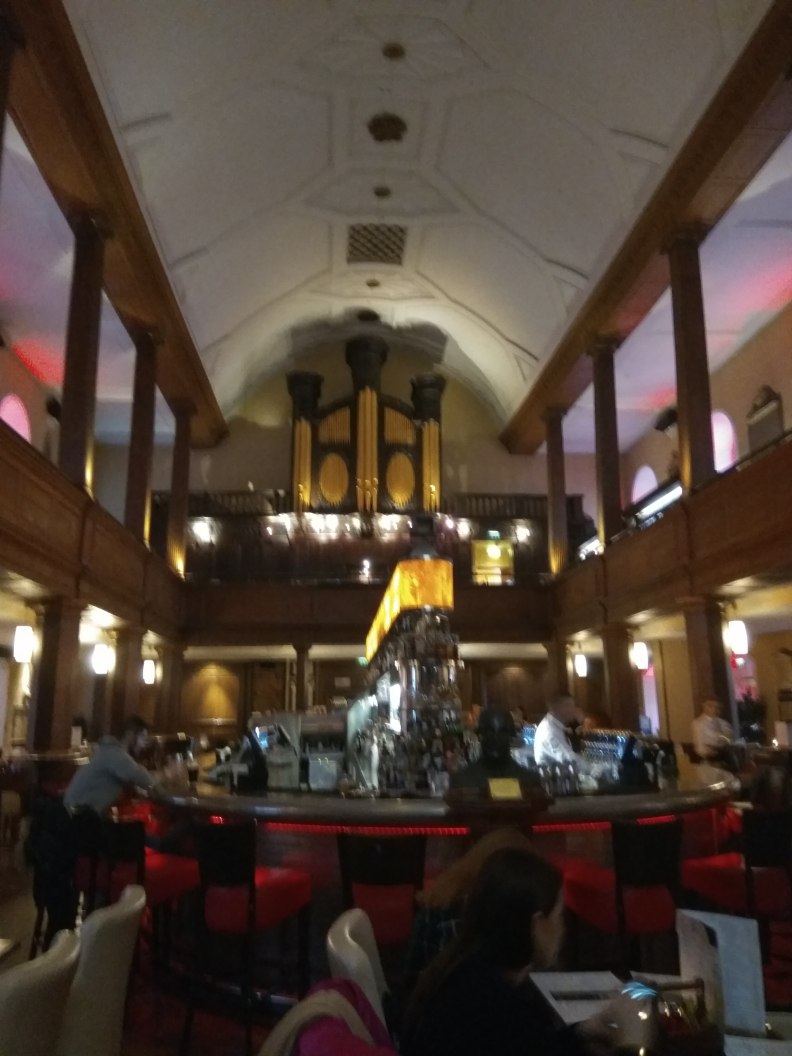 Still had the organ and everything.

We later wandered through a fancy mall. After checking out a few bars and live music, I returned to the hostel for bed. Isaac’s Hostel in Dublin, highly recommended.

The next day was more relaxed, (I think I walked for 10 hours the first day), and I started at Oscar Wilde’s memorial. 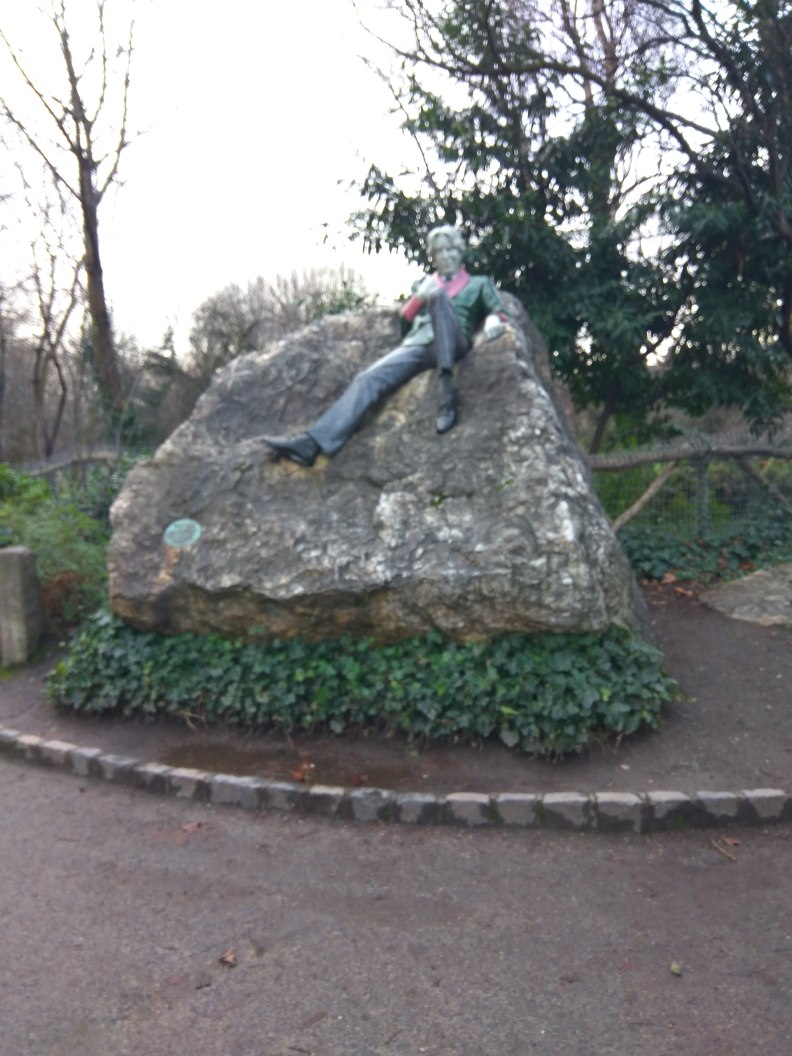 I really like his novel, The Picture of Dorian Gray, as well as some of his quotes. 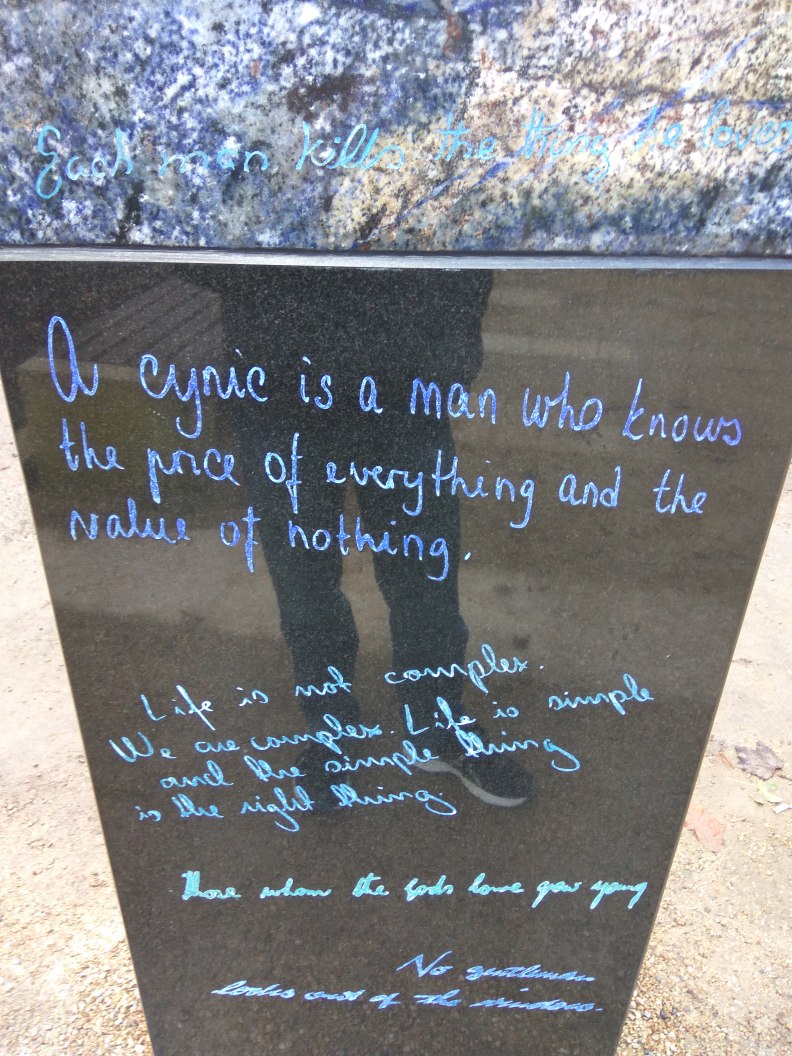 One thing about traveling outside of Canada, especially to cities, is missing the natural scenery that we have in abundance. Anyways, even though it had a lot of people in it, St. Stephen’s Green in the heart of Dublin was a nice break. 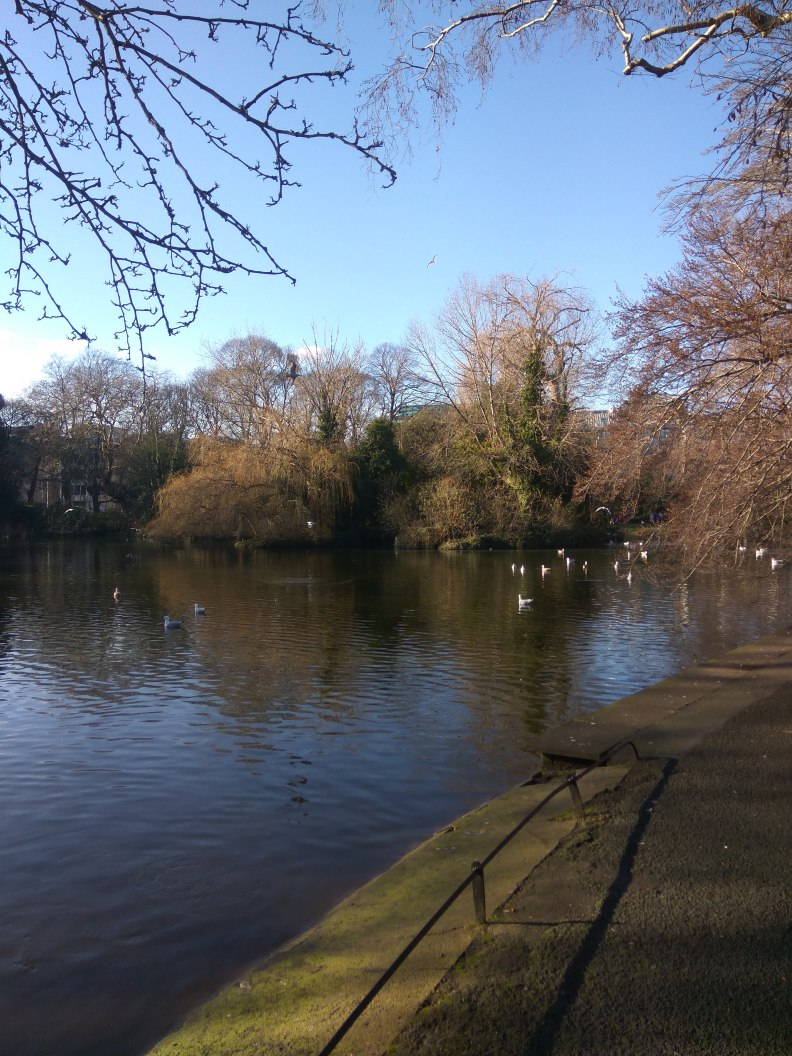 I found the green I was looking for! 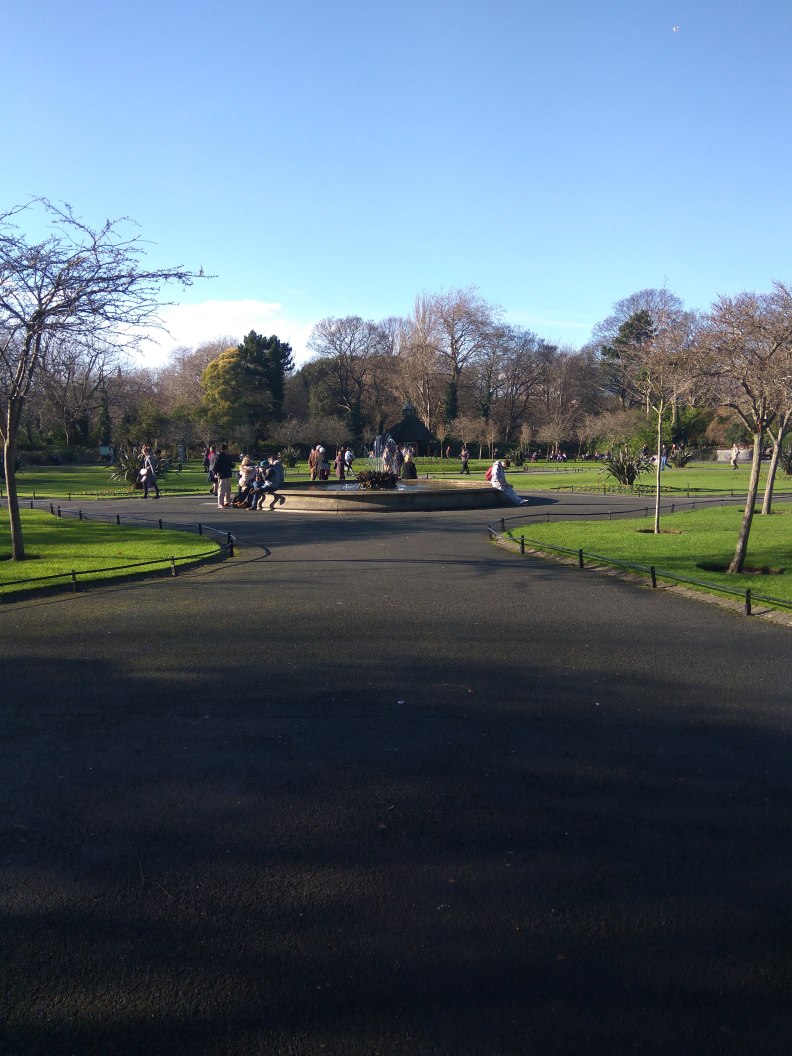 On my last night I had dinner at an Italian place near the Ha’penny Bridge, so called because it was the first bridge built in Dublin and crossing it cost half a penny. 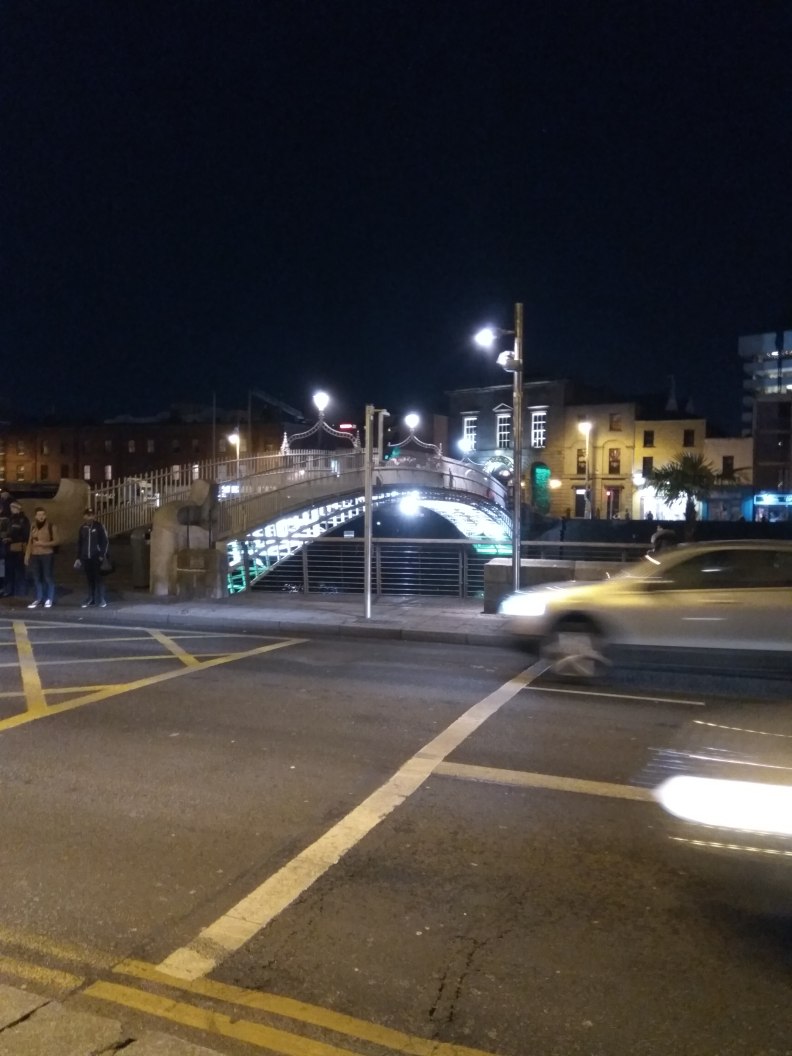 Started with wine and pizza at one place, 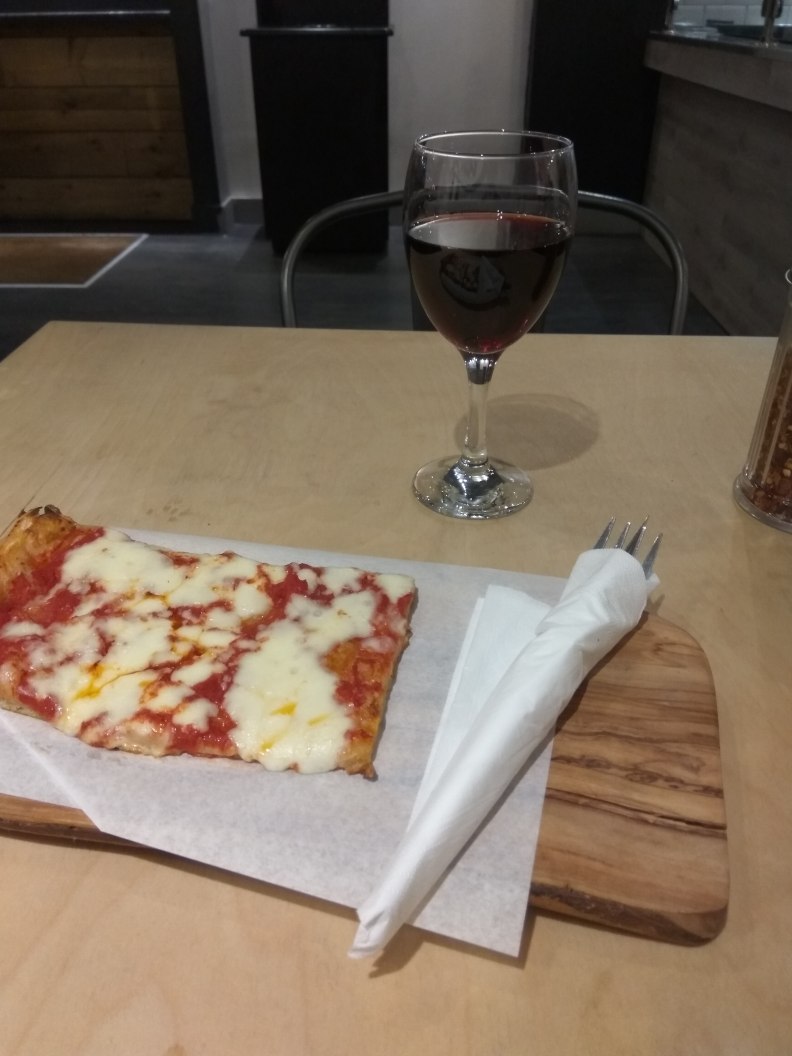 and since it was the last night, got a crepe and some nighttime coffee at another place. 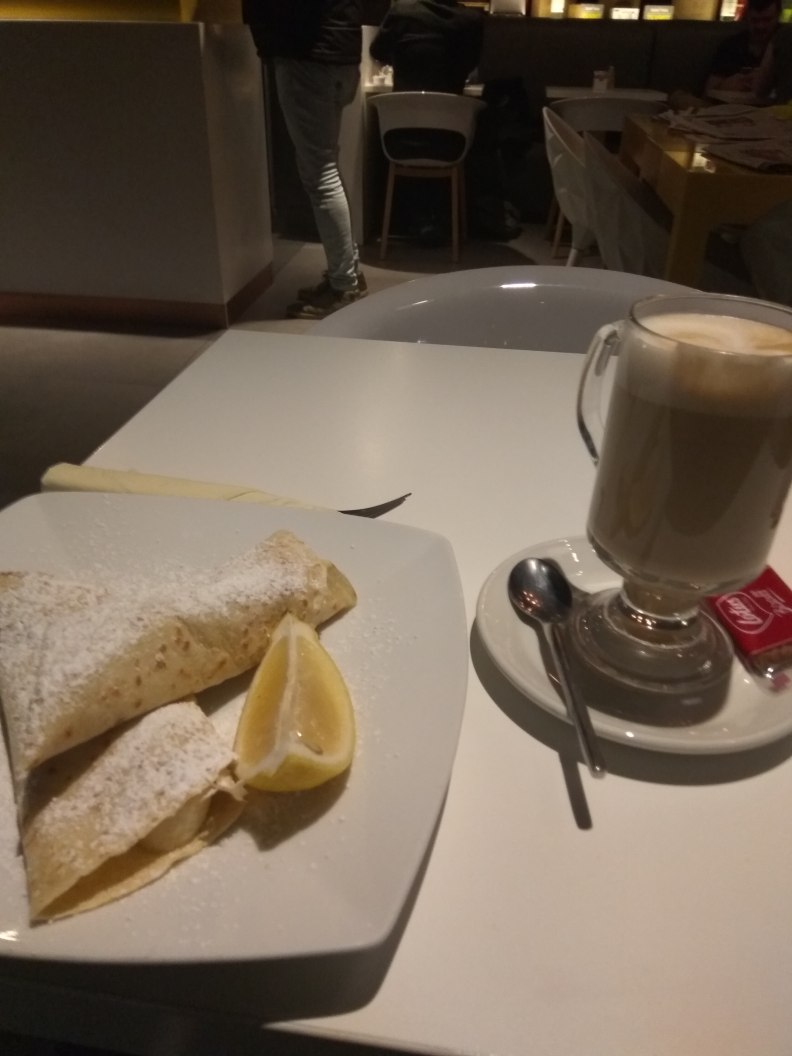 I loved Dublin, and would love to return to Ireland someday to see more.

This Saturday, I will be leaving Manchester for Lisbon, Portugal where I will be meeting my dad and sister for her reading week. I’m excited!